Ross Byrne ready to steer the ship for Ireland against England 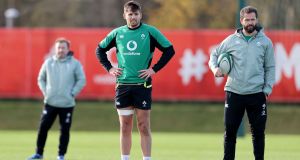 Ross Byrne couls at start at outhalf for Ireland against England on Saturday. Photograph: Dan Sheridan/Inpho

One of the more curious sub-plots to this week’s England-Ireland game at Twickenham is that the two outhalves in the Irish squad twice faced off against each other in both the 2014 Under-20 Six Nations and Under-20 World Junior Championship.

Billy Burns kicked 13 points, and Ross Byrne nine, when England beat Ireland 33-9 at Northampton in February 2014 before the sides met again in the semi-finals of the Under-20 World Cup in Auckland the following June. Burns contributed 14 points and Byrne five that day as England beat Ireland 42-15 in Auckland en-route to overcoming South Africa in the final.

Maro Itoje was one of England’s four try scorers in the first of those meetings when Charlie Ewels, his possible secondrow partner, packed down at lock as well. That was an England Under-20 side that kept giving for not only has Burns gone on to play for Ireland, but Ross Moriarty and Nick Tompkins are now of Wales while scrumhalf Callum Braley has represented Italy.

“Yeah, I played against him twice,” Byrne recalled yesterday with a laugh. “I suppose he plays very similarly to how he does now. He was very good on the gainline. He loves those attacking kicks as you see week in, week out for Ulster and every time I played against him he did it pretty well – he was on the winning side both times!”

This week, in the absence of Johnny Sexton, Byrne and Burns will be running the good shop Ireland, and the three have spoken about “a bit of everything” in the outhalf mini-meetings according to Byrne. “It’s about how we feel the team is going, if there’s any areas that we need to improve on, if it’s very minor detail or the overall team shape, any areas that we feel are going very well or any that we need to improve on.

“I suppose it’s great having three 10s who probably view the game in slightly different ways. We can all pick little things off each other and the overall aim is to make sure Ireland are going forward in the right direction.”

Only one of Byrne’s eight caps to date was with 10 on his back rather than 22, and that was when thrown in at the deep end of the 57-15 World Cup warm-up defeat by England at Twickenham last year – “That was a long time ago,” he says.

Even so, taking command of a team during the week is something which Byrne has long since become accustomed to within the Irish squad and in 91 games for Leinster, of which he’s started 60.

“It’s something I find pretty natural to be honest. It doesn’t really faze me at all, it’s something I’ve always done no matter what environment I’ve been in. Once I’m in the team and I’m playing it comes pretty naturally to me and I consider it one of my strengths, so I enjoy it.”

England’s highly varied kicking game has caused Ireland as much bother as their famed physicality in recent games and their ability to find grass through their halfbacks and left-footed duo of Henry Slade and Elliot Daly earned the field positioning for their mauling tries against Georgia last Saturday.

“We have obviously spoken about it a lot and it’s something that we are repping in training,” admitted Byrne. “We are very aware of what they’re going to do but it’s also about us imposing our game on them.”

“They’re probably the benchmark and I think they are a lot further along their journey that we are,” he also admitted of England’s kicking game. “They have probably been doing it for the last three or four years so it’s something I’d imagine they talk about a lot during the week and they probably rep during the week. I suppose the players they have probably played similarly at club level as well so it’s quite natural for them to do it when they play for England. They have had success off the back of it, so when you have success doing something you are unlikely to change it.”

But it’s also a tactic that has evolved in Leinster and Ireland recently.

“Yeah, I think it’s something we’ve definitely worked hard at, particularly in the last few games, and in training. It’s something we are very aware of in the game at the moment. Defences are so good now and the backfield, which is quite good as well. Having more than just your nine and your 10 being able to kick, across the whole backline, definitely makes it a lot harder for the opposition to predict.”