‘Look, I think it is a storm in a teacup. It was a split-second thing’ 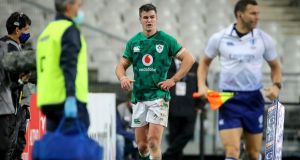 Johnny Sexton leaves the field at the Stade de France after being replaced. Photograph: James Crombie/Inpho

Oh infamy, infamy, everybody has it in for him. He may be a driven, sometimes angry competitor, but like all players, Johnny Sexton is a sensitive soul and he has not enjoyed the furore surrounding his infamous head-shaking after being replaced in the 70th minute in the Stade de France.

That much was clear during the grilling he received from a screen full of journalists on Thursday, but nothing would have upset him more than the critique of his former team-mate and captain Brian O’Driscoll.

Sexton confirmed he has apologised to Andy Farrell, sought feedback from some team-mates and expressed his regret publicly. He talked of learnings and, of course, he should have known that there was every chance at least one camera would linger on him when he was removed from the fray.

But his biggest regret by far remains not winning a Six Nations title. A la Roy Keane, winning is paramount.

“Yeah, I am a Man United supporter so you can imagine the week I’m having. It’s been a pretty tough start to the week on all fronts,” he said, adding Ireland’s losing position was the main source of his angst at the time.

“If we’re winning the game and I’m coming off I’m not going to be as disappointed. My reaction was the way we played in the second half in terms of accuracy but also that lack of ruthlessness we had during the whole game. I was disappointed in that and it came together in one moment. I can’t say it any more times really.”

Confirming he’d spoken to other players this week, Sexton added: “Look, I think it is a storm in a teacup. It was a split-second thing. It didn’t carry over into the dressingroom after. It didn’t carry into the team get together that night. It was just one of those things you wish you could take back but, unfortunately, you can’t and you live and learn.”

The furore has also diverted attention from the questionable decision to replace Sexton with 10 minutes remaining and Ireland eight points behind.

Farrell, who also considered it a storm in a teacup, would rightly be more concerned if Sexton walked off smiling broadly, and as to whether there were different rules for different players, said: “You’ve got to understand the person. Everyone is different within this group.

“Johnny won’t mind me saying neither it’s not the first time is it?” noted Farrell with a smile. “It’s his personality. It’s what gives him that winning edge. Of course, there’s always learning to go with that but everyone is different and you treat people differently as well.”

Nor was Farrell of any mind to shed light on their conversation.

“That will stay between me and Johnny. We’ve got a good relationship and a respectful one. Respectful is the word right at the top of that relationship. I’m more than happy with how things are going.”

So endeth Sexton’s first Six Nations campaign as captain, although he said he’d let others review his performance.

“I’m not going to comment on my performance as captain because I don’t like talking about myself but were lessons learned? Of course. You’re under scrutiny and you’re under a microscope and you’ve got to keep your guard up at all times,” he admitted, with perhaps ‘head-shaking gate’ in mind.

“But also you’ve got to be true to yourself and you can’t just change everything about yourself, because there’s some part of that which was the reason why Andy asked me to be captain. So you can’t change yourself fully but you’ve got to have better awareness of yourself and how that’s perceived by certain people. So, yeah, lots of learnings and hopefully I’ll be better going forward.

“I just wished that we had performed better on Saturday and won the championship – that’s ultimately my biggest regret.”

Another debate concerning Sexton’s captaincy was the decision-making in taking penalties at goal or going to the corner, notably when opting for the latter with the clock in the red at the end of the first half.

“The other decisions I was making when they were down to 14 men. The only regret I had on those early decisions was maybe I should have taken a scrum when [Anthony] Bouthier got the yellow card because obviously you can use that one-man advantage. With a lineout they can probably defend it a bit easier. So maybe a small regret there.

“All week we spoke about being aggressive, having an attacking mindset, we gotta go and try and win the Championship, not kind of hope and be conservative. That was a real moment of intent. If you score people would say it changed the game and if you don’t it’s our own decision. I know that. I know it doesn’t always work.”

Citing the decision to go to the corner when leading by 12-7 against Wales, which led to Ireland’s third try en route to a bonus point, Sexton noted: “I think I got a bit of criticism for that as well.”

“I don’t mind if it’s my fault, that’s fine. But we just need to be better next time and there’ll be times where me and James [Ryan] make a decision, or I make a decision and we go for it and we score. I’m not going to take all the credit because ultimately the forwards have got to go and do their thing or we’ve got to finish it as backs.”

True to form, there was a note of defiance here too.