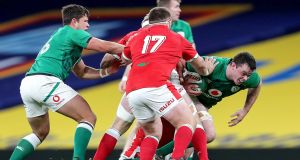 James Ryan, who acted as an interim captain after Johnny Sexton departed injured in the victory over Wales, has been chosen by Andy Farrell to lead Ireland against England in the Autumn Nations Cup clash at Twickenham on Saturday.

The 24-year-old, who has pretty much captained every team for which he has played from his time in St Michael’s College to leading the Ireland Under-20 team to a World Junior championship final in 2016, has been give the responsibility on the occasion of his 30th cap.

Ryan explained that while “it’s a huge honour for me (and) I am so looking forward to it,” he would lean heavily on the leadership group within the squad, citing the influence of players like Peter O’Mahony, Ian Henderson and Keith Earls.

He continued: “We get to drive the week as a collective, a core group of us. Having guys like Pete, Hendy, Earlsie there will make my job a lot easier.” His objective is to wear the honour lightly in not becoming bogged down or suffocated by his new status and instead concentrate on the minutiae of preparing diligently on a personal level.

“It is the same for me this week as it is every week. I have to look to do my job really effectively, hope to play well and not get sidetracked with all the captaincy stuff because I am going to need to get my performance right just like everyone else in order for us to get a result this weekend.”

Ryan’s modesty precludes him from dwelling too long on the captaincy but his teammates are happy to expand on his qualities. Keith Earls was asked for his impressions and pointed to certain similarities with former Munster, Ireland and Lions captain, Paul O’Connell: “He [Ryan] was fairly quiet [when he first broke into the squad], but you could already see the leadership qualities he had in the way he prepared himself, the way he went through his detail and prepared off the field.

“When he took the field he was a different animal [and] scored with his first touch in international rugby. He’s been incredible; he’s come on leaps and bounds [and possesses] a lot of similarities to Paulie, just his mannerisms, the way he comes across and speaks, everyone just listens straight away. He’s got that presence.

“Even off the field, he’s constantly working, looking at lineouts. He trains hard in the gym and for a young lad his body’s been through a lot already, he turns up every week. Similar to what Paulie would have done, he’d do whatever it takes to get the win at the weekend.”

Andrew Conway offers an insight into a player with an insatiable drive to be the best he can for his team. “As a player there are very few like him that I’ve come across. He’s come in and been able to transition (the best) from schools to Under-20s and he was playing international rugby pretty soon after, instead of what happens a lot of people, they might stall a bit or think they have it sussed.

“He’s a fella who will have his week planned out to get better and he’s constantly adapting and looking to lead through his actions. He’s also looking to lead by communication and bringing people with him.”