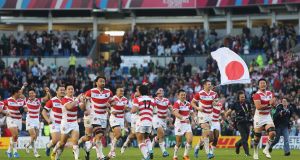 South Africa’s head coach Heyneke Meyer said that the result was “unacceptable; I have to apologise to the nation.” Harry Potter author JK Rowling tweeted, “you couldn’t write this,” while a host of former players and coaches lined up to express their admiration for Japan’s thrilling 34-32 victory over the Springboks in Brighton.

The current England coach Eddie Jones was in charge of Japan as they produced the biggest shock result in the history of the Rugby World Cup. Jones had assembled a cosmopolitan coaching team that included former England international secondrow Steve Borthwick and ex-French hooker Marc del Maso, while the team was led by New Zealand-born number eight, Michael Leitch.

South Africa led 12-10 at half-time and the game was delicately poised at 22-22 going into the final quarter when South African replacement hooker Adriaan Strauss, a cousin of former Leinster and Ireland hooker Richardt - scored a try thereby injecting a momentum that many expected would see them go on and win the game.

It didn’t pan out like that as the Brave Blossoms refused to wilt. Japan’s outstanding fullback Ayumu Goromaru, who scored 24 points in the match, crossed for a beautifully worked score but with time running out the Springboks led 32-29. Japan were awarded a penalty and instead of pointing at the posts to try and tie up the game Leitch opted to take a scrum close to the South Africa line.

It was a massive gamble given the size and calibre of the South African scrum but despite an imperfect platform, Japan kept their patience working the ball first towards the right-hand touchline and then sweeping back to the left, where they found replacement wing Karne Hesketh (who had been on the pitch for less than a minute at the time) to dive over in the corner.

It was the final move of the game and clinched a supposedly impossible triumph. The stadium went ballistic, with tears of joy everywhere except for the Springbok team and their supporters. There were a number of firsts that day. The teams had never previously met, Japan had never beaten a Sanzar team and South Africa had never lost to a Tier 2 nation.

It was the first game in the pool but despite beating South Africa, Samoa and the USA, Japan lost to Scotland and became the first team in the history of the tournament to win three pool matches and not qualify for the knockout stages.

In January of this year work was supposed to have started on a film that adopted a working title of The Brighton Miracle with Max Mannix writing and directing. Temuera Morrison, Jango Fett in Star Wars, is to play Eddie Jones.

It isn’t the first time that a momentous Rugby World Cup occasion has been immortalised on the screen, following Invictus, a film directed by Clint Eastwood and starring Matt Damon as Springbok captain Francois Pienaar and Morgan Freeman as Nelson Mandela, that commemorated South Africa’s World Cup success on home soil in 1995.