Liam Toland: Proficiency in possession the priority in Cardiff 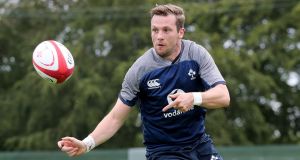 Jack Carty: tomorrow’s Ireland pack has seven ball carriers, four of whom have real footballing skills. With that platform, pack and midfield, Carty can work his options. Photograph: Dan Sheridan/Inpho

A prime principle in employing force or power in pursuit of a team’s objectives is to ensure it is effective. If not effective, as in Twickenham, then what?

For this reason I fear Ireland’s greatest challenge in these coming weeks is not when the opposition have the ball but when we do.

This may seem strange considering the rampant English performance and the eight tries to two concession. But the lineout management is already fixed, unit defensive cohesion improved and with it the severe cost England inflicted should be lessened – eight tries dropping to an average of two per match.

So, how do we become more effective in possession? This weekend, the result is important but Irish use of possession is much more so.

Warren Gatland knows how we use the ball. Once Wales are mentally prepared to make about 200 disciplined tackles in the right areas; winning is always a possibility. Gatland will tell his troops, such as Ospreys’ second row pairing Adam Beard and Bradley Davies, to mentally prepare for 20 monster hits and blindside returnee Aaron Shingler for at least 20.

Add to that ‘stat’ the triple team tackle that England swamped Ireland’s ball carrier with, immediate trench warfare ensuing, or the famed Welsh chop tackle. In these circumstances what is Jack Carty to do?

The obvious is slip back into the pocket and employ a variety of kicks; wipers, sliders, chips, garryowens, cross field etc, etc. But, our overwhelming returns on kicks have been muted these past two seasons as oppositions have developed coping strategies; flooding the kicking lane etc – not to mention their evolving counter attack.

To avoid same Carty will have to kick the ball out of play thus more lineouts! So what then?

Willie Anderson ‘continuity’ plus clever restart plays off dead rucks moving the point of attack. Conor Murray would normally box kick off same but the opposition rule the air so a fresh approach requiring patience and a reset further out to regain pace and momentum is needed. Although at 13 Chris Farrell could be a huge help to Carty on these ruck restarts; ditto Andrew Conway and Jacob Stockdale.

Amidst t the Twickenham onslaught there were but two Irish passes before contact; both resulted in tries. The first was when Ross Byrne got the ball wide into the tram tracks; Jordan Larmour scored.

The second was later with Peter O’Mahony’s tip on pass to Sean Cronin off a brilliant attacking line; Bundee Aki scored. Two passes before contact; two hard support lines running onto the pass and two tries.

Last Saturday there were too many Irish crash merchants crashing. This tactic must be mixed up entirely to prevent early opposition defensive reads and subsequent chop and swamp tackles.

None of last Saturday’s starting pack had sufficient power nor subtlety in their carries with but one footballing player – Tadhg Beirne – who has the physicality as a number 5.5 (neither a 5 nor a 6), a tad like RWC winner Owen Finegan who could play with the ball.

But, crucially, tomorrow’s pack has seven ball carriers, four of whom have real footballing skills. With that platform, pack and midfield, Carty can work his options. Will he be allowed to?

Finally, in days of yore lineouts were called by the hooker or the pack leader/captain. The hooker calling was always a challenge as his wants (100 per cent accuracy) and the team’s need often conflicted.

The hooker would hit his favoured target although the team required an entirely different target. The pack leader/captain, being a leader would ‘acquire’ the calling but this too was at odds; the team needs versus his lineout knowledge. If the tighthead prop is captain he may lead but be the worst to call lineouts.

The modern team require a lineout manager who is consumed, like the prop is for scrums, in all things lineout. Bob Casey was brilliant, ditto many others, Paul O’Connell etc but many secondrows are simply not; especially in the white hot heat.

Ireland have scores of lineout options but will focus on a select few for tomorrow’s game. The lineout manager, having played with and against many of the Welsh in Six Nations, European competitions etc will also study hours of lineout footage before devising strategies to combat the opposition with all sorts of built-in cancel variations options etc.

Fewer options lead to comfort and simplicity and better outcomes but should those options malfunction the lineout manager needs serious cerebral ability under huge physical and mental stress to redress the rot; he must protect his hooker, the team and the tactics. This area will improve vastly tomorrow and Ireland’s starter plays and tactical mauls will flourish.

This’ll be the basis of an Irish win over a weakened Welsh selection. But, if all the forwards aren’t contributing to the Willie Anderson ‘continuity’ hunting for soft shoulders, on their terms converting a Welsh triple tackle into an Irish advantage by offloading beyond the tackle or passing before contact into the subtle hole the third Welsh defender is opening by turning their outside shoulder inwards, then a win is good for the senses but not for the continuity required against Scotland or South Africa.

PS: With the All Blacks clearly looking for up-tempo rugby, 108 Test prop Owen Franks has been dropped from their RWC squad. All Black scrum time against the Springboks in Yokohama has become much more challenging – Springbok win?