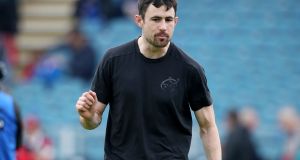 Ireland coach Joe Schmidt has expressed concern about the knowledge Felix Jones is bringing into the Springboks’ camp.

Ireland and South Africa are on a potential collision course to meet in the World Cup quarter-finals. Jones was exposed to the Schmidt playbook as a player and more recently as assistant coach touring Japan with the Irish squad in 2017.

“It’s awkward because you don’t have to be a rocket scientist [to know] he came to Japan with us last time so he was right in amongst it,” Schmidt said. “He’s with us. He’s seen everything that we deliver and he would have a great knowledge of even the language we use in our camp so it’s awkward for us.”

Schmidt revealed that the IRFU made several unspecified roles available to the 32-year-old after he rejected a contract extension with Munster.

Last season Jones would have learned Munster were interviewing for a new senior coach, eventually hiring Stephen Larkham to oversee the attack, which was previously Jones’ brief.

“There was a couple of opportunities here but I also am a massive fan of what Felix has got to offer in the future,” Schmidt continued. “It will be a great learning experience for him. I just hope we don’t suffer as a consequence because he is a smart coach and already knows a lot about us.

“If we do get to a quarter-final it has to be New Zealand, South Africa or Italy we play against so that could mean he is directly opposite us on the coaches’ bench.

“I can’t control what Jonesy does. Those days are gone. Once he played fullback for me I had a little bit of influence. He is a champion player, a champion bloke. He will be a really good coach. I just hope he delays that for two months.”

Rassie Erasmus, the former Munster director of rugby, now in charge of the Springboks, succeeded in adding Jones to his coaching ticket despite the players rejecting the initial idea of making him attack coach to replace Swys de Bruin, who stepped away this month for personal reasons.

“I spoke to the players after Swys de Bruin decided to step down and the consensus was that we didn’t want a new attack coach,” said Erasmus.

“The feeling was that bringing in someone in that role now with new ideas now would be destabilising at this last stage of the preparations. But they were interested in having more analysis of defensive patterns and structures to assist in breaking down the opposition.”

Schmidt added: “It’s an awkward situation with Felix but I’d a long chat with him yesterday. It’s a fantastic opportunity for him to go to a World Cup with a team that are on a massive upwards swing.”