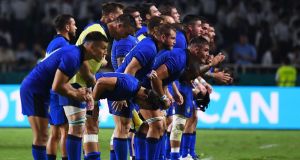 Italy’s players bow to the crowd after beating Canada at the Fukuoka Hakatanomori Stadium in Fukuoka. Photograph: Getty Images

Italy made it two bonus-point wins from as many Rugby World Cup Pool B games as they beat Canada 48-7 in Fukuoka.

The Azzurri raced into a 17-0 lead in the opening 13 minutes, with Braam Steyn and captain Dean Budd registering tries.

Further efforts from Sebastian Negri and Mattia Bellini, either side of a penalty try, boosted the advantage before the spirited Canadians, playing their tournament opener, pulled a try back through Andrew Coe.

Federico Zani and Matteo Minozzi added two more tries for the Italians late on as they wrapped up a comprehensive victory to which Tommaso Allan contributed three conversions and a penalty.

The seven-try haul from Conor O’Shea’s side matched that from Sunday’s 47-22 victory over Namibia.

Showing 10 changes in their starting line-up, Italy made a fast start, with Callum Braley going close to scoring a try in the opening few moments, Patrick Parfrey just getting to the ball first.

Soon after, O’Shea’s men had points on the board thanks to an Allan penalty, and in the seventh minute the first try arrived as Steyn powered through the Canadian defence and over.

The second came in the 12th minute when Budd, skippering the side in place of Sergio Parisse, collected the ball from Braley and advanced to score under the posts, with the Canadians again providing little resistance.

Canada subsequently wasted a great chance to hit back in the 17th minute as Tyler Ardron teed up Matt Heaton — just on as a replacement for Lucas Rumball — but he fumbled the ball just a few metres from the line.

The Canucks exerted further pressure thereafter but could not reduce the deficit before the break, and three minutes into the second half Italy extended their advantage as Negri crashed over from close range.

Canada were then denied a try by a great Minozzi tackle on Jeff Hassler before Italy went further ahead through a penalty try, and moments later they were 36-0 up, Bellini crossing after fine work from Jake Polledri.

Canada thought they had got off the mark soon after when Ardron put the ball down under the posts, but the effort was disallowed following a review, with Ben LeSage judged to have knocked on.

After continued pressure, though, the try finally came for Kingsley Jones’ team as Coe sped down the right, past Giulio Bisegni and scored in the corner.

Italy then had the final say, with Zani and Minozzi crossing in the 72nd and 78th minutes respectively.