Sexton has been unable to train this week, after being hurt against Scotland on Sunday 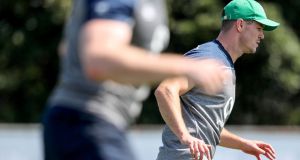 Joe Schmidt is confident that Johnny Sexton will be available to face Russia on October 3rd. Speaking to the media this morning, the Ireland coach expressed no concern about leaving the world player of the year out of the squad that faces Japan on Saturday at the Ecopa stadium in Shizuoka.

All of a sudden, Jack Carty, at 27 and with only one start from eight caps (all in 2019), is the starting Irish outhalf.

Schmidt said Sexton was considered as an impact option but the 34 year old’s inability to recover from a thigh injury sees Joey Carbery return following ankle surgery in August.

“We wanted to give Jack Carty as much certainty as possibly so we told him on Tuesday that he would be starting so he could get his head around it,” said Schmidt.

‘Train Tuesday to play Saturday’ has been the strict Irish policy ever since the 2015 World Cup quarter-final, when Schmidt was forced to turn to Iain Henderson - who wins his 50th cap this weekend - Jordi Murphy, Chris Henry and Keith Earls at centre in a 43-20 defeat to Argentina.

Sexton has been unable to train this week, after being hurt against Scotland last Sunday, but it’s still a massive call ahead of the Pool A showdown against the hosts.

“I’ve been coaching Johnny for the last 10 years and it is not something I would be too concerned about because he keeps himself in good condition, and we do believe he can come back in and hit the ground running, if that’s against Russia Thursday of next week,” said Schmidt. “We always knew we are going to have to manage the start of the tournament with six and five day turnarounds.

“We have got to show confidence in our squad. At the last World Cup there was some players who didn’t play a lot and then suddenly they were required for the quarter-final and maybe they didn’t have the confidence that we would have liked them to have. We have committed in the last few years to making a decision earlier in the week in some positions. And saying: ‘Look, this is going to be your game. Step up and take ownership.’”

On the eve of the tournament Sexton expressed concern about his lack of game time.

“He is never happy about being left out,” Schmidt continued. “He is always looking to play but he had a good hit out against Scotland. I think 55 odd minutes. He got a little bit of mileage under his belt there. We thought about bringing him off the bench - there would be that security - but we got a lot of time for Joey Carbery. He was fit and ready for Scotland so we want to get him involved. He’s a good option off the bench and it takes the pressure off Johnny a little bit this week.”

Sexton’s only other game time was 63 minutes on September 7th against Wales. Carbery has also struggled for fitness since fold his ankle against Italy on August 10th.

That’s not the only injury concern as Jack Conan is a late withdrawal with a foot problem, so Peter O’Mahony returns to the team - despite failing a Head Injury Assessment (HIA) on Sunday - with CJ Stander switching to number eight.

Stander was due to play blindside. Rhys Ruddock is on the bench.

“Jack Conan, someone stood on his foot, he is absolutely fine, but he was sore at training,” said Schmidt of the unavailable Leinster backrow. “We got Peter and Rhys who are fully fit. Rhys captained the side the last two times we played Japan and did a super job.

“It’s a case of being confident in the squad.”

Schmidt was also keen to provide some background to O’Mahony’s head injury situation. Seemingly, the Munster captain failed the concussion test because of a breakdown in communication due to two HIA’s overlapping. Bundee Aki came off, and failed, his test on 20 minutes, while O’Mahony was taken off on 26 minutes just after Tadhg Furlong’s try.

“Pete was mad keen to play. He only played that 25 minutes [against Scotland] and unfortunately, I think we might have got Pete back out there but we had two HIAs at the same time and therefore, the communication wasn’t as smooth as it normally is so when you’re trying to repeat words back to somebody, it became a little bit difficult for him.

“That the HIA process is a precautionary process to ensure that anyone who has a suspected concussion is immediately removed from the field, it doesn’t mean that they’ve had a concussion and in both Bundee and Pete’s cases, they flew through HIA2 and HIA3. They are absolutely symptom-free as they were after the match, so, there’s no elevated risk, we don’t believe.”

However, Aki is replaced at inside centre by Chris Farrell with Jordan Larmour named on the bench ahead of Andrew Conway.

“We have a super medical staff and that allows us the confidence to have those guys involved if we see fit. We mix and match a little bit there. Delighted with the way Chris played against Scotland and Garry Ringrose played well too. We just think if we put that back out, it’s a good little bit of continuity for us. Particularly because Bundee wasn’t due to play this game anyway and he played a lot in the lead-up. That was part of our thinking.”

Interestingly, Tadhg Beirne is retained ahead of Jean Kleyn as secondrow cover.

“Michael will bring impact off the bench,” said Joseph, who was also asked about Sexton’s exclusion. “We have just seen the Irish side. No Sexton is a surprise. I remember my first test match. I believe [JACK CARTY]is going to play very well but we are going to put him under pressure.”