‘There’s a lot less experience without him. Johnny Sexton is a key player’ 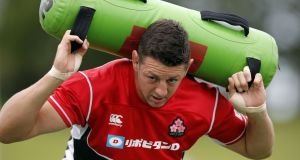 “Arigato gozaimasu.” Joe Schmidt speaks more Japanese than his opposite number Jamie Joseph. After Schmidt’s media masterclass in Yumeria almost spinned a room crammed full of elite journalists into believing Johnny Sexton’s unavailability is more show of faith in Jack Carty, we taxi back to Hamamatsu for another Kiwi coaching lecture.

The 3pm appointment with Joseph – an All Black and Brave Blossom in equal measure – inevitably honed in on the fact that Saturday will be Carty’s first real Test match start.

The world player of the year being kept on ice sends a jolt of confidence into the Japanese ranks. They know Joey Carbery but Carty is a stranger.

“The Irish team had just been named and while no Sexton is a surprise it doesn’t change anything that we need to do,” said Joseph. “There’s a lot less experience without him. Johnny Sexton is a key player, but I remember playing my first Test match; it’s going to be an exciting time and [Carty’s] going to go out and play very well, I believe, unless we can put him under pressure.”

By the way, Joseph’s international debut was a skin of the teeth All Blacks victory over Ireland in Dunedin. That was 1992. His first cap for Japan happened seven years later. Different times.

“What’s this young 10 for Ireland like?” asked Luke Thompson, strolling over the gangway back to his hotel. “Actually, he’s not that young is he?”

We compliment the Connacht man’s performances off the bench in the Six Nations and note how he skipped over Ross Byrne before giving up the charade: He’s third choice. The other two have struggled with injury all year.

Such an unknown commodity should soften the 21-point handicap spread before kick-off at Ecopa stadium. Then again, Japan know deep down their best chance of reaching the last eight rests with victories over Samoa next week in Toyota City and Scotland eight days later in Yokohama.

“A quarter-final would be huge for the growth of the game in Japan.”

Thompson doesn’t seem bothered by any noise. Big, strong Kiwis are rarely rattled. He is content to shoot the breeze about fellow Christchurch native Richie Mo’unga. “Some say could be as good as Dan Cater, but you never know”– and how his former team-mate and current coach Tony Brown could have become a great All Black in any other era but the decade overlapping Andrew Mehrtens, Carlos Spencer and Dan Carter.

We tell Thompson about all the kooky bars and cafes nearby but keep quiet about our abandoned hotel up on the hill. Any other week he’d come into town for a beer but cap 69, at his fourth World Cup, has the 38-year-old staying off his feet. A pile of family land in from New Zealand tonight so some sizzling steaks might need devouring.

He asks about home. Not his, ours. “I remember we crossed paths when I was there.” He’s talking 20 years ago. In the press conference Thompson was asked what he remembered about 1999, and his time living in Blackrock’s boarding school on an exchange programme from St Bede’s.

“The people,” he replied. “The people in Ireland, just like the people here in Japan. I had an amazing year, met some friends for life, my best memories are the people.”

The plan was to run the teenage lock on the local club’s under-20s but the first XV liked the cut of his six foot five inch frame. On the way back to Japan’s high rise bunker he remembers the players he rubbed shoulders with in Ireland. “Leo and big Bob Casey obviously, and Skids [Ciarán Scally], who didn’t play with us because he was already in the Ireland squad . . . And what was the 10’s name again?”

“Is he really? Nice bloke. I knocked around with all those boys.”

We remind him of the 27 tackles made after ending a two-year retirement to tussle with James Ryan in 2017.

“I felt every one of them. It was my first game in six months. They were short of bodies so they gave me a call and I came in.”

That was the end of him for another two years, until wife Nerissa told him to give the Japan coaches a call. He must be the oldest player to make a Super Rugby debut. But here he is. About to go toe to toe with Ryan again.