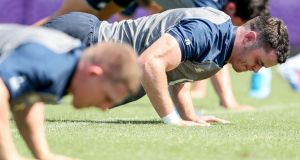 So far, so good. Ireland’s 2019 Rugby World Cup campaign is off to a near-perfect start, after they opened with a dominant 27-3 win over Scotland in Yokohama last Sunday.

Joe Schmidt’s side came into the tournament under serious scrutiny following an average Six Nations campaign and a worrying 57-15 defeat to England at Twickenham in August.

But they answered their critics in style against the Scots. Ireland flew out of the blocks with a display of brutal efficiency, securing a bonus point as they took control of Pool A.

Granted, Gregor Townsend’s side were poor - but Ireland didn’t give them a chance to breathe. Every player performed their job with aplomb, while the pack operated a faultless set-piece - not losing a single lineout or scrum.

And now it’s on to Shizuoka, and a date with tournament hosts Japan. It is a fixture fraught with danger, as the Brave Blossoms look to emulate the heroes of 2015 and cause a huge upset.

With fixtures against Russia and Samoa to follow, Ireland know they will be well set if they can plot a route past Jamie Joseph’s side, and they won’t be taking anything forgranted.

And here is everything you need to know, ahead of Ireland’s second match in the Rugby World Cup.

Ireland’s second Pool A fixture, against tournament hosts Japan at the Shizuoka Stadium.

The match kicks off at 8.15am Irish time (4.15pm local time), which means an early night on Friday.

And of course, you will be able to follow all of the action via the Irish Times liveblog, which will be up and running from around 7.30am.

Again, you can find all of the broadcasting information in Mary Hannigan’s excellent guide to the schedule - you can read that HERE.

The story so far?

Both Ireland and Japan head into this match unbeaten - Ireland after their 27-3 over Scotland, while the hosts beat Russia 30-10 in the tournament opener last Friday.

For Ireland, this match is the most difficult pool assignment they have left, while Japan will have one eye on their final fixture against a vulnerable Scotland side.

The tournament is young but Ireland’s path to a maiden Rugby World Cup semi-final already looks laid out for them - providing they avoid an upset on Saturday.

New Zealand’s opening round win over South Africa - the world champions turned on the style to win 23-13 last Saturday - means the Springboks are almost certain to finish as runners-up in Pool B.

That means should Ireland win Pool A, they will face Rassie Erasmus’s side in the last eight - perhaps a preferable option to taking on the All Blacks, but a contest which would hugely physical. If they make it past the Boks and into the last four, the body count will be high. But lets not get ahead of ourselves just yet. . .

Joe Schmidt has made four changes to the side which beat Scotland, with the most eye-catching coming at outhalf. Johnny Sexton picked up a knock against the Scots - with Conor Murray taking over the place-kicking duties - and he misses out against Japan. That means Jack Carty takes the number 10 jersey with Joey Carbery - back to full fitness - starting on the bench.

Up front there is no change to the pack which was so impressive in Yokohama - the deadly engineroom partnership of James Ryan and Iain Henderson continues - while Rob Kearney and Keith Earls are restored in the backline. Schmidt’s selection shows he clearly isn’t taking the Japanese lightly.

Japan meanwhile make five changes from their 30-10 win over the Russians, with captain and number eight Michael Leitch making way for a fit-again Amanaki Mafi. 30-year-old Leitch is named among the replacements, with coach Joseph suggesting he could still have a big part to play in Shizuoka.

He said: “Michael’s obviously our captain but if we’re going to be successful in achieving our goals, we’re going to have to have impact and experience off the bench, all the best teams in the world have a great bench.”

This will be the eighth meeting in history between the two sides, who first played each other in the 1991 Rugby World Cup at Lansdowne Road - Ireland running out 32-16 winners. They met again in the 1995 tournament in Bloemfontein - Ireland winning 50-28.

Ireland have a 100 per cent record against Japan - Saturday isn’t the time to let that be spoiled.

It is arguably the biggest shock in Rugby World Cup history (although Samoa might disagree) and definitely the most famous - Japan’s 34-32 win over South Africa in Brighton in 2015 was a landmark result for one of the game’s growing nations.

The Brave Blossoms put more physical opponents to the sword with a thrilling display of running rugby - Karne Hesketh’s last minute score seeing his side past the two-time winners at the Amex Stadium.

Beating Ireland on Saturday would match and probably exceed Japan’s win over the Springboks, and would surely capture the imagination of an entire nation - but as far as Schmidt’s men are concerned there will be no room for romance or sentiment in Shizuoka.

The All Blacks are ahead of the curve again

New Zealand headed into the tournament with doubts over their quest to lift the Webb Ellis Cup for a third-consecutive time - doubts which were quickly put to bed by their brutal dismanlting of a resurgent, confident Springboks side.

And as Gordon D’Arcy writes this week, Steve Hansen’s side remain the team to beat this autumn: “The game is changing, as it always does at World Cups. We think it’s one way and then someone tears up the script. Jonah in 1995. The French in 1999. Maybe the traditional “cup rugby” methods will not prevail anymore. Clearly, New Zealand don’t need Dan Carter’s drop goals to win three in a row.

“New Zealand are, all of a sudden, ahead of the curve again. Godammit. We thought there was a gap in the market. They came up against the form team on the planet, the traditional uncompromising Springboks, and found a way to outwit them. It was stunning, off-the-cuff, stone-cold, skill-based winning rugby.”

Who’s on the whistle

Australia’s Angus Gardner is in charge on Saturday - Jerome Garces and Matthew Carley are his assistants, with Ben Skeen the TMO.

It’s going to be a bit sweaty - it’s forecast to get as high as a gruelling 28 degrees in Shizuoka on Saturday morning, which means there will be a big onus on fresh legs off the bench. There’s also rain forecast - although it is unlikely to be as bad as Yokohama.

Bring on the Springboks. . .