Rugby World Cup 2023: Where will Ireland’s votes come from? 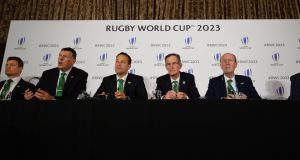 The Irish delegation at the press conference where Ireland presented their bid to host the 2023 Rugby World Cup. Photo: Glyn Kirk/Getty Images

On November 15th the announcement will be made as to who will host the 2023 Rugby World Cup. Ireland, France and South Africa will each be looking for at least 20 out of the 39 votes available to win. So, where might Ireland’s votes come from?

Ireland would be hopeful that their neighbours would be well disposed to the Irish bid, but it’s hard to know, and most likely the RFU delegates on the World Rugby Council will be swayed by the recommendation of RWC Ltd.

Again sure to be swayed by the recommendation, but if the Irish bid cannot win the support of their fellow Celts, then they may as well give up.

Likewise, were the Irish bid to win the recommendation of the evaluation process, they would be hopeful of Scotland’s support.

Naturally more aligned to France, who have historically been of huge support, although the Italians are very much part of the Pro14, where the IRFU have been very supportive.

Part of the Sanzar bloc, and therefore would be well disposed to the South African bid. However, Murray McCully, New Zealand’s designated minister for the 2011 Rugby World Cup and now the country’s foreign minister, has publicly stated his government’s support for the Irish bid, and that he would encourage the NZRU to do likewise. The two Unions have worked fruitfully together, witness the historic Test in Chicago last November, and the IRFU are believed to have voted for New Zealand’s 2011 bid.

Would be more inclined to vote in favour of South Africa’s bid. In ruling out an Australian bid for the 2023 tournament two years ago, an ARU spokesperson said: “We are aware that our Sanzar partners South Africa are looking to host their second World Cup and we support their bid.”

The UAR could have three votes come November, pending a decision by the World Rugby Council in May. Of the three bidding countries, their ties are unquestionably deepest with France but given Agustin Pichot’s influence and high profile in World Rugby, would most likely go with the evaluation team’s recommendation.

Regional Associations (including Japan who were recently awarded an extra vote)

As well as Australia and New Zealand, the Oceania Federation includes Fiji, Samoa and Tonga, and others, such as the Cook Islands, American Samoa and Papua New Guinea. Would most likely take their lead from New Zealand.

Sudamérica Rugby, known as Confederación Sudamericana de Rugby (Consur), has nine member countries, including Argentina, Brazil, Chile, Paraguay and Uruguay. Would perhaps most likely row in with Argentina and Pichot.

Rugby Americas North has 11 member countries in North America, Central America and the Caribbean, including the USA, Canada, Trinidad and Tobago, Mexico, the Caymen Islands and the Bahamas. Would most likely take their lead from USA Rugby and Rugby Canada.

Rugby Africa, formerly known as the Confederation of African Rugby (CAR), would assuredly, and understandably, stand loyally behind the South African bid.

Rugby Europe has 48 members, of whom 39 are affiliated to World Rugby, and are long since very closely aligned to the French, who have done more than anybody to support European rugby over the years. Hence they would be best disposed towards the French bid.

Asia Rugby, formerly the Asian Rugby Football Union (ARFU), has 31 member unions in countries across Asia, stretching from Kazakhstan to Guam. The IRFU made a presentation to Asia Rugby in Outer Mongolia on May 2nd. Japan, followed by Hong Kong and South Korea, are its leading rugby nations, and they would most likely take their lead from Japan.

They were granted an extra vote by the Council of World Rugby in May and it could rove pivotal. Japan would most likely act honourably, and thus support whichever country’s bid is recommended, although Ireland’s two-Test tour this year and the two governments’ celebration of 60 years of diplomatic ties can’t have done Ireland’s bid any harm.

The Ireland 2023 bid has stressed the links with the Irish diaspora in Canada, which numbers four and a half million. Ireland toured there in 2013 and hosted the Canadians last November. Were the Irish bid to win the recommendation, they would be hopeful of Canada’s vote.

Ireland’s participation in the Chicago fixture with the All Blacks prompted the biggest attendance (62,300) ever witnessed at a rugby game in America and the visit last June to the Red Bull Arena in New Jersey has strengthened the bond between the two. Were Ireland’s bid to be recommended, they would seem likely supporters.

Part of the European bloc which would have closest ties with France. Although, that said, Ireland hosted the Georigans in November 2014 and have regularly taken part in the Tbilisi Cup in recent years.

The Romanian Rugby Federation was a founding member of Rugby Europe along with France and others, and would most likely be best disposed toward the French bid.

1 Every yellow jersey winner must still feel guilty by some association
2 Matt Williams: The sky is not falling in on Irish rugby - but Ireland do need a new plan
3 Kevin Babington: Learning to live again after life changed forever on Long Island
4 Weekend Club GAA previews: Kerry football and Kilkenny hurling deciders top bill
5 Superfan John Murphy keen to keep streak going and make it 80 not out in Donegal
Real news has value SUBSCRIBE