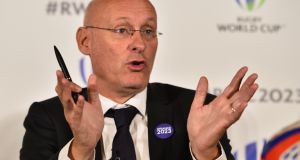 Bernard Laporte, president of the French Rugby Federation, at a press conference after France presented its bid in London to host the 2023 Rugby World Cup. Photograph: Getty Images

Money talks in sport, and World Rugby is no exception, not least with its once-every-four-years World Cup.

This is the governing body’s main cash cow, and the Irish bid will need to have been as compelling as the team hoped given that both the South African and French bids on Monday vowed to provide a bigger financial return from hosting the 2023 tournament when they made their presentations to the World Rugby Council in London.

Whereas the Irish bid met World Rugby’s stated target of a £120 million (€135m) tournament fee, which by rights should be set as a ceiling as well, the French and South African bids have provided tournament fees of £150 million (€170m) and £160 million (€180m).

Perhaps more concerning from an Irish perspective is the total profits which each respective bid is assuring World Rugby from hosting the World Cup.

Whereas the Irish bidding team have sought to keep its government-guaranteed overall profit confidential, the South Africans have quite openly said a World Cup in their country would generate £220 million (€250m) and the French around €300 million.

These projections may be farfetched and based on ambitious ticket sales and corporate packages. Nor do they have the same government-backed security as those put forward by the Irish bid. However, given the 2019 World Cup in Japan is not expected to generate the same profit margins as England 2015, some members of the World Rugby Council who may even be well disposed to the Irish bid may be swayed.

The South African bid brought a strong political and historical element to its presentation. It made much of its facilities, and its proven experience in hosting major sports events from the Fifa World Cup in 2010, the Cricket World Cup, the Africa Cup of Nations.

In their press conference the deputy president Cyril Ramaphosa had to address many concerns about security issues to the council. Also in attendance were minister for sport Thiulas Nxesi, and the table was flanked by two former World Cup winning captains Francois Pienaar and John Smit.

Having seen bids fail three times in a row, they tugged at the heartstrings with regular references to hosting the 1995 World Cup, and invoking the memory of Nelson Mandela.

Their impressive video was a collation of images from that tournament and other rugby games, along with safaris, and featured slogans such as “Head the call. Come to the birthplace of humankind. Where it all comes together. Where rugby is number one.” This closed with: “Ready Already.”

Having recently hosted the European Championships in football (not to mention the Rugby World Cup only 10 years ago), the French also made much of its facilities and experience of hosting major events, as well as its financial yield, which is believed to be supported by one of Bernard Laporte’s close allies, billionaire businessman and Montpellier owner Mohed Altrad.

That relationship has led to French minister for sport Laura Flessel investigating accusations against Laporte that, as president of the French Federation, he influenced an appeals committee which reduced sanctions against Montpellier. Ironically Laporte and Flassel sat side by side on Monday.

It is understood the French presentation began with a vow from Laporte that were his country to host the 2023 World Cup it would be used in part to curb the Top 14’s excessive spending on foreign players. This would in turn stem the flow of players from the Southern Hemisphere big four and elsewhere to the Top 14, and thus help to safeguard the competitiveness of Test rugby.

Their video presentation featured Laporte mimicking a pre-match pep talk, but instead of a team of players it was to an assortment of non-rugby people, including restaurant chefs and staff, a dancer from the Moulin Rouge.

“This World Cup – we’ve got to have it,” implores Laporte. “At any price.”

Alongside Laporte and Flessel on Monday were bid director Claude Atcher and former French player Sebastien Chabal, who was flanked by Jonah Lomu’s two sons Dhyreille and Brayley.

The former was born in Marseilles when Lomu made a comeback with Marseille-Vitrolles in 2009 in Federal 1. Atcher was the president of the Marseilles club at the time. Nonetheless, flying them over did not seem in the best of taste.

Laporte and Atcher will next canvass the Welsh and Japanese.

1 Welcome to Iten in Kenya – home of champions and cheats
2 How do Klopp’s Liverpool measure up against greats of past?
3 Saracens to accept second 35-point deduction and effective relegation
4 Shane Lowry’s Abu Dhabi defence crumbles in the sand
5 Matt Williams: No easy way to earn your spurs as a top coach
Real news has value SUBSCRIBE