Contracts will be granted on form, with the money permanently included in RFU budget 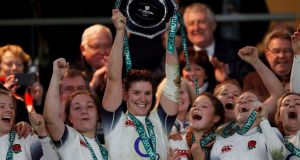 England are to become the first fully professional women’s rugby nation. Twenty-eight players will receive one-season deals from January 2019, with the RFU moving away from temporary contracts that followed whichever cycle, the 15-a-side World Cup or Olympic Sevens, was seen as their priority.

The new contracts will be granted on form, with the money permanently included in the RFU budget.

“We are delighted to be able to offer full-time contracts to our 15s players,” said Steve Brown, RFU chief executive. “This has long been our ambition and demonstrates the RFU’s commitment to growing the women’s game and the belief we have in the future of the sport.

“We are at a tipping point for women’s rugby globally, and it is our ambition to be world No 1 and drive growth at every level. As an organisation, from top to bottom, we are very much behind this and want to see the continued expansion and growth to realise the ambitious targets we have set ourselves.”

That “tipping point” is already reflected by semi-professional contracts in New Zealand and the Josephine Sukkar-sponsored Australian Super League.

It’s unclear how much the English contracts are worth, but the RFU have stated they will be benchmarked on what female athletes in team sports are paid globally.

Earlier this year the New Zealand rugby union granted the Black Ferns part-time contracts worth €7,300-€11,800. The current England Sevens contracts for women are in the range £20,000-£30,000 (€22,500-€33,730), so concerns remain among players about having to take a significant drop in wages, from what they earn outside the game, to become professional rugby players.

Despite what appear to be inevitable moves towards the sport going fully professional, the IRFU has no plans to journey down a similar path.

The long-awaited strategic plan on the future of women’s rugby in Ireland – coming out of the disastrous 2017 World Cup campaign on home soil – will be published in early October.

A renewed emphasis has been placed on this season’s interprovincial series, won by Leinster last Saturday, but as victorious coach Ben Armstrong noted, the number of games remains insufficient if Ireland are to remain competitive on the international stage.

“A second round of games on a home and away [basis] would be ideal,” said Armstrong. “If you could play right up into the autumn internationals, barring the injuries, you’d be happy that the girls are well-prepared to go into those and put their best foot forward for Ireland.”

As the standard of rugby soars in England, that number is expected to increase significantly.

“The game in England is really going beyond what anyone else is doing,” said Alison Donnelly,  founder of scrumqueens.com. “After the negativity surrounding contracts leading up to last year’s World Cup, this is a move to get England back to the position of world leaders.”

Wales and Scotland keep a small number of players, up to six, on full-time professional deals, while France only contract Sevens players but, like Ireland, there is a crossover to the 15-a-side squad.

Man United’s latest Parisian party more impressive than heist of 2019 09:45
Lions to play Japan on home soil before tour to South Africa 09:26
Tiger Woods in the groove as he plots a path to Augusta 09:22
No underage or minor GAA to be allowed under Level 5 Covid-19 restrictions 08:53
Ole Gunnar Solskjaer hails players after win over PSG 07:57
Crossword Get access to over 6,000 interactive crosswords