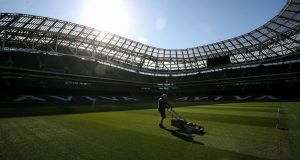 Testing for temperatures and coronavirus symptoms, travelling to and from training individually, and without use of the showers or other facilities in groups initially of no more than four players, are all part of the graduated return to training and playing guidelines issued by World Rugby.

This is part of a 29-page document issued by the game’s governing body outlining return to training and a return to play guidelines, which are entitled “Safe Return to Rugby – in the Context of the Covid-19 Pandemic”.

The document regularly stresses that this report is “fluid” and can be updated at regular intervals pending new national government directives, with all guidelines subject to the easing or revising of government restrictions.

The wearing of masks and/or gloves at training are not deemed essential, rather that “in some situations, such as in the gym or during meetings, the use of face masks should be considered”.

Warning that “until a vaccine is developed for Covid-19 the team environment will be quite different”, the WR report also states that all players and staff should undergo “daily screening”.

This would entail filling in a questionnaire at home to check symptoms and then having their temperature checked before entering the facility. “If your temperature is above 37.5C you will be sent home and advised to contact your team doctor or primary care doctor,” advises the document.

If a player or member of staff is then required to be tested, the document advises unions to follow government advice in terms of testing, as the premise for being tested varies from one country to another with regard to how many symptoms an individual may be displaying. For example, in Ireland until recently a person suspected of contracting the coronavirus needed to show two symptoms in order to be tested.

In this, as a World Rugby spokesperson stressed “the return to play guidelines provide unions, competition owners and clubs at all levels a best-practice framework for a graduated return to training and playing”.

This guideline for plotting rugby’s return is entirely based on a relaxation of government social distancing measures.

The likelihood is that the first step toward a return to collective training will be in groups of no more than four players, pending approval from health authorities, who could meet to train. They would probably need to observe social distancing in keeping two metres apart and would mostly be training outdoors.

Social distancing would also have to be accentuated when players do weights. “Where possible any communal areas should be well ventilated,” adds the report which, in stressing the need to “reduce body contact to a minimum” advises that “shaking hands, clapping hands, embracing and cheering or mourning in a group is to be completely avoided”.

Players and staff are, initially, to change and shower at home rather than use the facilities as would normally be the case, and adds “while social distancing remains, team meetings should be held outdoors or in spaces which allow for 1 person per 4m2”.

Only when government restrictions on the gathering of groups is eased, to 10 people or less, would small group training commence, and then when that figure is raised to 50 or less, full squad non-contact training could resume.

Most of the measures in the document apply to the amateur/community game as well, although clearly fulfilling all this criteria will prove more problematic for the latter.

For example, clubs may not have the facilities and resources to conduct temperature checks. Nor might they be able to afford to cleanse and disinfect their gyms and meetings rooms, in which case all activities would take place solely on the training pitch.