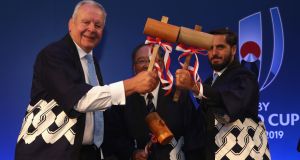 There may be no more on-field rugby contests for the foreseeable future but a hugely significant match-up takes place on Sunday when the World Rugby Council will vote to decide whether Bill Beaumont is retained as the governing body’s chairman for four more years, or whether there is an unlikely electoral coup in favour of Agustín Pichot.

Pichot, World Rugby’s vice-chairman for the last four years, is running against the incumbent, but without a running mate, whereas Beaumont is being backed by the president of the French Federation, Bernard Laporte, who is thus being unopposed as vice-chairman.

In what is also shaping up to be a battle along classical northern and southern hemisphere lines, Laporte’s backing should be significant in cementing Beaumont’s position. The French Federation president is a proven political animal, having served as the French secretary of state for sport under Nicolas Sarkozy from 2007 for two years and successfully canvassed the same WR council only two years ago when the French bid won the rights to stage the 2023 Rugby World Cup.

All told, 30 of the 51 votes are allocated to the 10 Tier 1 unions in the Six Nations and Rugby Championship, another two each to the six regional associations, plus two for Japan and one each for seven unions – Canada, USA, Uruguay, Georgia, Romania, Samoa and Fiji.

Pichot’s bid has been backed by Clive Woodward, but it is widely expected that the Six Nations will give Beaumont their 18 votes en bloc, including the votes of Ireland’s three delegates – John O’Driscoll, Phil Orr and Su Carty, as well as Rugby Europe’s two votes.

As for Pichot, he ie expected to have the 12 votes of the Sanzar bloc of Argentina, Australia, South Africa and New Zealand, plus Sudamerica Rugby’s two votes.

“I am starting 20 votes against 14,” Pichot explained. “I think it is going to be tough, but I am an optimist. I strongly believe that it could happen. But I am doing this because I love the game. If it’s okay, it’s okay, but if it’s not okay, it’s fine, and I will carry on in rugby in some shape or form.”

However, Pichot is campaigning against such a loaded voting system, as he seeks to make World Rugby more democratic.

“We talk about values, but why do we have 30 of the 51 votes split between 10 nations? That is not the democracy of the 21st century. Fiji has one vote and Argentina has three, why? Every kid in the world would ask you: ‘why?’

“I will challenge that. I am not saying everyone should have three votes, but I am saying that type of progress has to be done to make an equal game.”

Pichot has called for the game to use the coronavirus crisis as an opportunity for “global realignment”. To this end, he’s seeking to better integrate Tier 2 countries in more equitable financial structures, while reviving his concept for a Nations League, expanding the reach of Lions tours (to include Argentina naturally) and demanding an off-season of eight to 12 weeks.

“I am not an anarchist who wants a revolution of everything. I want the Six Nations to be really successful, but you have to be generous with the people beside you,” said Pichot. “I don’t want to cut the Six Nations, I want to make it bigger. I want an Irish shirt sold in Tunisia, a Wales shirt in Canada or China. That is the growth of the game.”

The Fijians were then forced to swiftly withdraw Kean’s nomination this week after allegations in a Sunday Times report that it had heard “graphic recordings” of Kean using violent and homophobic language when in charge of Fiji’s prison service.

By rights, all of this ought to count against the Beaumont/Laporte ticket, but it probably won’t. As with World Cup bids, that the vote will be conducted by private ballot and the result, audited by PwC, will not be announced until May 12th, also tell us much about World Rugby’s lack of transparency.

Pichot will poll well, but it will be a major surprise if Beaumont doesn’t win by a margin of something like 28-23.