Catalans Dragons could relocate to England after French sport ban 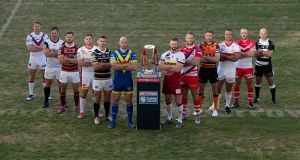 The English Super League is looking to restart its season. Photograph: Getty Images

Steve McNamara has said Catalans Dragons could relocate to England to fulfil their obligations in Super League after all sport in France was banned until September.

The French prime minister, Édouard Philippe, outlined the country’s plans to exit lockdown on Tuesday and confirmed no professional sporting events would be allowed even behind closed doors throughout the summer.

With Super League looking to restart in June or July, Catalans may now have to move their entire squad to England for a number of weeks to participate in any such resumption. When asked if that was an option, McNamara said: “All options are absolutely on the table. We’re not ruling anything out at this stage.”

Catalans expect to receive more details on the ban from the French government but McNamara rejected any notion they may sit out the rest of the year because of the logistical problems they now face. “We certainly wouldn’t have any intention of doing that; we’ve a team that’s ready to play and we need to find a way of doing that,” the coach said.

“I’m speaking only a couple of hours after the ban and there’s lots of work to find out what we do. September seems a long time away but July sounds a lot less scary. From September, hopefully we would be back on track at home.”

McNamara, who drove home to England as lockdown began to be implemented across Europe, intends to head back to Perpignan to help Catalans to plan their next steps.

“May 11th was the date pencilled in for us to return to training but what that looks like now, we’re not sure,” he said. “But I’m going back pretty soon. We have lots of things to sort and lots of things to plan. We’re a different beast to other Super League clubs and there’s a lot of issues to come into play.

“There’s talk of quarantining people who come into the UK and that will have to be considered. We’ll hopefully find out some answers in the coming weeks.” - Guardian

1 Rory McIlroy puts integrity ahead of glory in US PGA second round
2 Ian O’Riordan: I want to ride my bicycle – to the top of Mount Everest
3 Why can't we buy an Ireland women’s rugby jersey?
4 World Cup fever has a way of bringing people together
5 Meath's time to even the score
Real news has value SUBSCRIBE