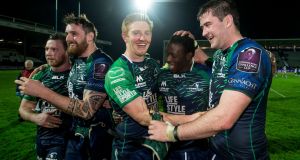 Being a professional rugby player means being paid to do what you love, but for the vast majority, it isn’t as glamorous as it sounds.

Danny Qualter made his Champions Cup debut aged 21 against Biarritz, after impressing for the Irish schools team and playing with the Irish under-20s for two years alongside the likes of Tadhg Furlong, Iain Henderson and Jordi Murphy.

He’d competed in the national rowing championships and played in Croke Park with the Roscommon minors, but chose to focus on rugby. In 2016 he won a Pro12 title with Connacht before making 44 appearances for Nottingham in the English championship. The last of which came in early March.

But aged 28 and approaching his peak, he will be unemployed at the end of next month, handing his CV out around his native Athlone to keep some money coming in before the possibility of signing for a new team arises.

The current coronavirus outbreak is the realisation of his very worst nightmare – exposing the uncertainty of his dream career. But it’s not the only reason why six Irish players currently contracted with Nottingham, for this year and the next, are in search of pastures new for the 2021 season.

“Playing professional rugby is my dream, but your livelihood depends on an 80 minute performance each week. It’s very uncertain at times if you’re on a year-to-year contract which the majority of players are.

“I’ve never signed a contract over one year, so when it gets to Christmas or you’ve an injury it can be very stressful because you don’t know what’s happening and you’re waiting for answers rather than knowing your future.

“And now, for all I know I could’ve played my last game of professional rugby.”

In February the English RFU announced that next season it would be cutting its funding of the Championship by 50 per cent. A month later the coronavirus outbreak prematurely ended the league’s season – and the jab-punch combo has led to Nottingham rugby opting to operate on a part-time basis in 2021.

“At the end of February the head coach gave me a ring and explained that they wanted to make cuts to the contracts we’d signed for next year. They were saying if we agreed the club would be able to stay full-time professional, but if we didn’t then they would have to become part-time or fully amateur.

“We asked the club if there was any middle ground that we could meet - and that was a far as we got in the talks and then the whole pandemic thing happened.”

On March 13th Nottingham’s Championship match against Jersey Reds was postponed after two of Jersey’s players were made to self-isolate after coming into close contact with a confirmed case of Covid-19. Three days later all rugby activity in England was suspended until April 14th, but on March 20th the RFU cancelled the remainder of the Championship season outright. The east-midlands club were sitting in sixth place.

“I flew home because the season was postponed and then it was cancelled completely. So we weren’t sure what was happening – if we were going to be paid – but at the end of March there was a conference call with a couple members of the board. The first thing they said was there’d be no questions answered at the end.

“They explained the club have furloughed all playing staff, where we get paid 80 per cent of our contracts. And then at the end of the meeting they said the club was going to go part-time next year, and that was pretty much it. It’d be two evenings a week and we’d be playing at the weekend.

“Obviously, I’d a lot of questions. My head coach and a member of the board rang me via Zoom a week later and explained that all contracts signed for next year have now been rescinded. Because of the loss of earnings due to Covid-19 and the RFU cuts that are out of their control.”

Qualter – who is unlikely to downgrade to part-time rugby – felt most disappointed by how “blunt the club was about it.

“I haven’t heard of any other Championship club other than London Scottish going part-time. But I understand they’ve been put in a difficult situation, at the same time, they don’t seem to realise that we have been too as players.”

The 6ft 5in lock’s contract for the 2020 season lasts until the end of May. He’s one of six Irish players who lined out for the club this season. Last year there were eight, helping to make his three years at the club a thoroughly enjoyable experience.

“I made six appearances in 2016 with Connacht when we won the Pro12, but I left in 2017 and was looking to get more game time. In my first year in England I started every game. In my second and third year I moved into a leadership role - calling lineouts and that stuff, and it’s been exactly what I needed in terms of developing myself. There’s no substitute for game time.

“The club looked after me very well, until recently I feel. The lads over there don’t take themselves too seriously and the Irish lads made it a little bit of a home away from home so you’d be talking about the Gaelic games and keeping an eye on the AIL results. The dressing room has been a fun place to be.

“I was planning on staying in Nottingham for one more year – I had signed a new contract in January – and after that I was hoping something at a higher level would come up.”

Qualter made his first start for Connacht at number eight but was soon cemented into the secondrow. His impressive athleticism, despite his size, his prowess in the lineout and his soft hands are sure signs of a childhood spent playing GAA.

Before excelling as a midfielder for the Roscommon minor footballers, Qualter also played hurling for Westmeath, and his dad Seamus has managed both counties’ senior teams.

“People say about Gaelic and how it transfers to rugby with the handling skills but I think it was the hurling. That hand-eye coordination with a sliotar was even better for me than the football. When I was younger I just loved being out and running around and competing. The same with my Connacht debut, at the time it was all about the excitement of playing the game.

“And you’ve got to enjoy it for as long as you can because someday it won’t be there. So It’s kind of like contradicting your mindset, you’re worried about what’s coming in the future but at the same time trying to enjoy what you do every day.

“It’s been hard recently though – this has been split into two stages with the RFU cuts and then the pandemic. It’s been so weird. But I’m working hard on the programme our S&C coach James Nolan sent out to us, keeping the fitness levels up and staying positive. There’s nothing else to be doing until rugby is back.”

And when that happens, Qualter and his 115kg frame is unlikely to be short of suitors, to continue his dream as uncertain as it may be.

Arsenal reward for Anfield win is home quarter-final with Man City 22:46
Dundalk in dreamland after hitting €3m Europa League jackpot 22:32
Filippo Giovagnoli soaks it all in as Dundalk march on to join the big fish 22:34
Harry Kane bags hat-trick as Spurs hit seven against Maccabi Haifa 22:23
Dundalk survive wobble to make group stages of Europa League 22:34
Crossword Get access to over 6,000 interactive crosswords