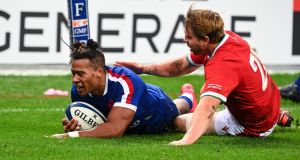 France’s Teddy Thomas has been ruled out of Saturday’s clash with Ireland. Photograph: Anne-Christine Poujoulat/Getty/AFP

France winger Teddy Thomas has been ruled out of Saturday’s Six Nations finale against Ireland in Paris.

27-year-old Thomas picked up a hamstring injury towards the end of last weekend’s 38-21 win over Wales at the Stade de France, in which he also scored a fantastic late try.

Despite being left out of Racing 92’s squad for their Champions Cup final defeat to Exeter Chiefs, Thomas has been first choice on the wing for French boss Fabien Galthié.

However he won’t be lining up against Andy Farrell’s side on Saturday, with 21-year-old Bordeaux outhalf Matthieu Jalibert called up into the French squad in his place.