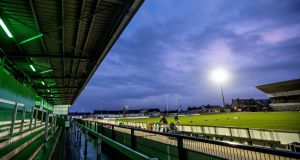 Connacht’s game against Benetton has been postponed after an outbreak of Covid-19 among the Italian club. Photograph: James Crombie/Inpho

Connacht’s match scheduled for next Sunday against Benetton in Galway has been postponed due to Covid-19.

“Benetton will not be able to travel due to a small number of isolated positive cases,” stated the Pro 14. “Public health guidelines in Italy currently prevent the Benetton squad from resuming rugby activities and as a result the fixture cannot take place as planned.”

The league will “examine potential dates in early 2021” to reschedule the fixture.

The Six Nations has confirmed that two of the final women’s games of the 2020 championship – Ireland against France at Donnybrook and Wales against Scotland – have also been postponed due to an outbreak of the virus in the French squad.

“The decision to postpone the match was taken by Six Nations Rugby, the French Federation and the IRFU following a recommendation of Six Nations Rugby’s testing oversight group, due to concerns raised over the potential risk of further infections within the French team,” the Six Nations stated.

“With regards to Wales versus Scotland,” their statement continued, “four Scottish players have withdrawn from the squad after they were identified as ‘close contacts’ with members of the France team they played against on Sunday October 25th and who have since tested positive for Covid-19 in France.

“In addition, another member of the Scotland squad tested positive today.”

The Six Nations “will seek to reschedule” both fixtures.