‘Ultimately unless we do our job whatever happens elsewhere is irrelevant’ 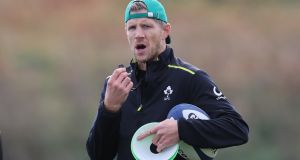 “We did get caught in it a little bit, but it was fine, there were no issues, we were in early enough to get in and get well fed when we arrived,” said assistant coach Simon Easterby.

Maintaining their life in a bubble, the squad are the only guests in their hotel and they will obviously be obeying the curfew. Their one excursion from their hotel was for today’s captain’s run.

“It’s not too bad now, there’s still a little bit of traffic around but we made it in and out of the stadium pretty well when we went for the team run. So it feels like normality for us at the moment,” said Easterby, albeit these things are relative.

“It’s a great surface,” added Easterby of the Stade de France pitch. “It looks like it’s going to be a fast track as well so hopefully the weather stays fine.”

Ireland have travelled with 31 players in order to cover all eventualities and they have no fitness or injury issues. Come kick-off in Paris, England may well have recorded a big bonus point win in Rome, meaning Ireland would have to not only beat France but score four tries as well in order to win the title.

“We can’t control that, I know it’s been said lots of times we can only control what we can do,” maintained Easterby. “Naturally people will have an eye on what’s going on, but ultimately unless we do our job whatever happens elsewhere is irrelevant. So we have to focus on what we can control, and that means getting ourselves right in the warm-up and starting the game as well as we can.”

Ireland’s priority will be to win the match first.

“That’s exactly right. If you go chasing things then often that can be a distraction, so we must start the game well, we must take opportunities when they arise. And sometimes we might go to the corner if we get opportunities, other times we may kick at goal and try to build a score.”

Ireland have managed three wins in Paris since 1972 and Easterby admitted: “Coming to Paris and getting a win is something that Irish teams haven’t had huge success with in the last 20 years. But we saw in 2018 that we stayed in the game and we were able to win the game late on. That may well not be the case tomorrow. It may be that the game opens up a bit

“So we have to focus on winning the game first, then after that we reassess probably at half-time on how the game’s going. The players have full licence to make good decisions on the pitch, and at the right times Johnny and the other leaders will do that.”

The absence of fans ought to make the Stade de France less intimidating than it has ever been when Easterby was there as a player or as a coach.

“It’s clearly an impressive place, and when we arrived there today, the players that hadn’t been there before took it all in. But there shouldn’t be a fear factor going there, because a lot of them haven’t had the kind of experiences I might have had as a player at certain times. It just presents a cracking opportunity for us tomorrow to go and express ourselves and win a game of rugby. And then off the back of that if we need to get certain things out of the game we’ll obviously have to do that.”

“But what an opportunity. The Super Saturday is set up so nicely. It’s taken seven or eight months to get to this point for us, but after the performance last weekend and the work the players have put in this week to get ourselves into this position, I can’t wait to see them go out and perform tomorrow.”