Ulster give first start to Sevens star Baloucoune against Dragons 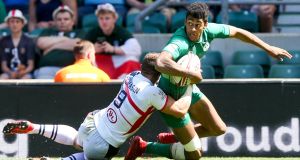 Ireland’s Robert Baloucoune is tackled by Stephen Tomasin of the USA during the HSBC London Sevens at Twickenham in June 2018. Baloucoune makes his Ulster debut on the right wing. Photograph: Andrew Fosker/Inpho

Ulster coach Dan McFarland gives a senior debut to winger Robert Baloucoune, an integral part of the success enjoyed by the Ireland Sevens team in the last couple of seasons. He is one of three academy players in the starting team, joining fullback Michael Lowry and loosehead prop Eric O’Sullivan.

Australian international Henry Speight has recovered from injury and starts on the left wing while the centre partnership of Will Addison and Stuart McCloskey is one that could wear the green of Ireland during the upcoming four-Test November series. Former Ireland U-20 international Johnny McPhillips gets a chance in place of Billy Burns at outhalf, the latter rested along with Jacob Stockdale and Nick Timoney.

Ireland captain Rory Best will lead the side and a pack that includes fellow Irish squad members Iain Henderson and Jordi Murphy. Rob Herring is fit again following a toe injury sustained against the Cheetahs last month while Greg Jones is included among the replacements.

Bernard Jackman’s Dragons makes 10 changes from last weekend and must do without six players currently tied up with the Welsh squad. The Welsh club’s record points scorer Jason Tovey has been signed on a permit from Cross Keyes and goes straight into the team at outhalf. Former Leinster and Springbok international Zane Kirchner is on the bench.

There were aspects of Ulster’s performance against Racing 92 last weekend that were admirable and those expansive patterns are something they’ll look to maintain, while addressing the set piece issues that undermined that attacking brio in Paris. Anything other than a home win would constitute a major surprise.