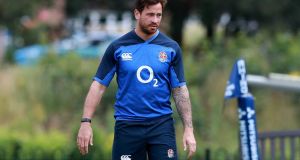 Danny Cipriani during an England training session held at the Lensbury Club on in London on July 9th. Photograph: David Rogers/Getty Images

Danny Cipriani seems destined to end his career without having played in a World Cup after he was left out of the 38-member England squad that flew to Italy on Monday for a 12-day training camp.

The Gloucester outhalf was voted the Premiership’s player of the season two months ago but his prospects of going to Japan in September appear no better than if he were lining up a penalty from halfway into a stiff wind.

Cipriani has won only two caps since Eddie Jones took over as head coach at the end of 2015. He was named in a 35-man squad this month but he did not feature in a camp in Bristol last week, ordered to focus on strength and conditioning work along with the Bath pair Anthony Watson and Sam Underhill, both of whom flew to Treviso.

Injury was not cited as a factor behind the 31-year old Cipriani’s latest omission. It was put down to selection with Jones continuing his policy of having two specialist outhalves, Owen Farrell and George Ford, backed up by Henry Slade and Piers Francis, who started their careers at No 10.

A reason Cipriani joined Gloucester from Wasps last season rather than accept offers in France was his dream of playing in a World Cup having been part of the final cut in 2007 and 2015. Jones did not mention him in a statement released by the English Rugby Football Union, merely indicating that the door had not been closed on anyone less than three weeks before the first of England’s three warm-up matches.

“Selection is absolutely challenging,” Jones said. “We have left some good players doing work at their clubs and they must be ready if called up. Treviso is a hard-yards camp with conditions similar to Tokyo. Team training will be about being adaptable and off the field enjoying each other’s company.”

Mike Brown offers Cipriani some hope. The Harlequins fullback has not played for England since the tour to South Africa last year and his last start at No 15 was in February 2018, but after being left out of the original training squad he was named in the 38 along with his club colleague Joe Marler, the prop having edged out Ben Moon who started England’s last Test against Scotland.