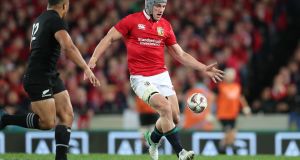 Jonathan Davies in action for the British and Irish Lions during the summer. Photograph: Billy Stickland/Inpho

Wales star Jonathan Davies is set to be sidelined for around six months after suffering a foot injury.

The Welsh Rugby Union said “it is envisaged that recovery will be in the region of six months,” while also confirming that 65 times-capped Davies requires surgery.

The Scarlets centre, who was hurt during a 29-21 loss to Australia three days ago, will miss Wales’ remaining autumn Tests against Georgia, New Zealand and South Africa, and also potentially the entire Six Nations.

“Jonathan Davies will undergo surgery to his foot following the injury sustained against Australia in the Under Armour Series,” the WRU said in a statement.

“It is envisaged that recovery will be in the region of six months.”

It is a major blow for Wales and the Scarlets to lose Davies, who was British and Irish Lions player of the series against world champions New Zealand earlier this year.

He went off during the dying seconds of Wales’ 13th successive defeat against the Wallabies, and looked in considerable discomfort.

Although Wales head coach Warren Gatland is set to make several changes for next Saturday’s appointment with Georgia, Davies was an integral part of his autumn plans. New Zealand are Wales’ opponents on November 25th, and then South Africa seven days later.

The 29-year-old missed the 2015 World Cup due to a knee ligament injury, but he has been in world-class form throughout this year.

Speaking to reporters on Monday, and before the full extent of Davies’ injury was announced, Wales assistant coach Neil Jenkins said: “It doesn’t look great.

“He is a world-class rugby player, there is no doubting that. Any team with someone like Jon involved is certainly going to miss him.

“He was outstanding in the summer for the Lions, for us and for the Scarlets at the end of the season.

“The sad thing is he’s been playing incredibly well, and it was right at the end of the game as well.”

Roberts, who has won 93 caps, missed out on a place in the original 36-man party announced by Gatland last month.

But he is now on duty at Wales’ training base, along with another call-up in Cardiff Blues prop Scott Andrews, who is currently on loan with Aviva Premiership club Bath.

Roberts, 31, captained Wales in their summer Tests against Tonga earlier this year, and was a surprise omission from Gatland’s autumn squad.

1 Gerry Thornley: Consistent trailblazers New Zealand once again ahead of the posse
2 Rory McIlroy: Maybe I’m just not as good as I used to be
3 Ken Early: PSG would be sensible final move for Ronaldo
4 Manchester United huff and puff their way into semi-finals
5 Sene Naoupu turning mind back to rugby after health scare
Real news has value SUBSCRIBE