Gerry Thornley and Liam Toland reflect on a record win for Ireland, as they defeat South Africa 38-3 in their opening November series match. Video: David Dunne 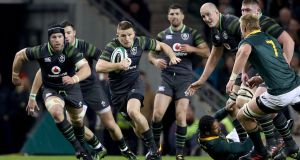 Ireland winger Andrew Conway makes a break for the opening try during the Guinness Series match against South Africa at the Aviva Stadium. Photograph: Dan Sheridan/Inpho

In the end it was a pummelling, but Ireland had to put in plenty of hard graft and tackles before decorating the game with a salvo of three converted tries in the last 10 minutes. With that it had become a rout, thoroughly eclipsing the previous Irish record win over the Springboks, by 32-15 here in 2006.

Thus, it could be interpreted as somewhat flattering, but then again it’s funny how superior teams often only reap their rewards in the final quarter. For all the relatively callow look of the Irish bench, they also made a huge impact, noticeably more so than their reasonably hyped counterparts, and typified by try scorer Rhys Ruddock.

It’s been a long time since the Aviva Stadium had been soaked in this manner, and Ireland did muddle around a tad. In truth, they hadn’t created a huge amount until that final quarter, but they were altogether more accurate with the greasy pill than the profligate Springboks.

Indeed, vastly better coached, Ireland looked like the team that had been together for nine matches and four months, and the Boks like they hadn’t played in that time, even though it was the other way around.

Ireland’s set-pieces and especially their collective discipline was also significantly better, while their breakdown work - across the team, whether it was Cian Healy or Rob Kearney hitting the ruck - was typically efficient too.

The home side looked fitter as well as fresher, and huge, hard-working games abounded, be it Tadhg Furlong, Iain Henderson, Sean O’Brien or CJ Stander. Conor Murray and man of the match Johnny Sexton, as they do, did almost everything right and little wrong, and on debut Bundee Aki brought enormous enthusiasm and energy - just witness his 17 tackles.

There were first Irish tries for Andrew Conway, on his full home debut, Rob Herring and Jacob Stockdale, on an eye-catching home debut. Darren Sweetnam also made his first appearance in an Irish shirt.

Having reverted more to type in their recent redemption mission against the All Blacks, the Springboks’ gameplan was predicated on getting their big straight runners over the gain line. Ireland’s response was to push up quickly and make their tackles, and as they were quite competitive at the breakdown this left the ‘Boks playing mostly off slow or static possession.

Even when they did go through the phases and create space out wide, their decision-making or handling usually let them down, whether it was Damien de Allende aimlessly kicking the ball away or Elton Jantjies and Siya Kolisi passing poorly to winger Courtnail Skosan, who also endured something of a torrid might under Conor Murray’s aerial bombardment and the chasing and aerial pressure of Andrew Conway.

There was little or nothing of an offloading game, or tip-on passes, from the Boks to keep the Irish defenders guessing.

With the Boks needing two converted tries to draw level and 12 minutes remaining, they used up almost half a minute with a maul on halfway. Go figure.

As the smoke from the pre-match pyrotechnics cleared, Jantjies kicked off long down the middle, and Sexton gathered to find touch on half-way. From the line-out, Sexton held up Coenie Oosthuizen and Bundee Aki lined him up, lifted him and drove him back in tandem with Sexton. The net effect saw the unfortunate Springbok stretchered off with what appeared a bad knee injury.

The Boks held the ball in from their ensuing put-in, perhaps seeking a penalty, but instead it was the Irish scrum who inched forward, particularly on Cian Healy’s side, to earn the penalty. Sexton unerringly opened the scoring from about 43 metres.

South Africa were mostly content to kick, and when they didn’t their handling hurt them, an example being a wounded duck of a pass by Jantjies. Sexton kept the scoreboard ticking with two penalties at the breakdown, first against Lood de Jager for not rolling away, then against Siya Kolise for breaching the new amendment for kicking ruck ball. It looked a tough call, all the more so as referee Ben O’Keefe appeared to signal the ball was out.

Whereupon, things improved further for Ireland. After Aki kicked downfield and Jantjies conceded the line-out 40 metres out, Murray box kicked and Courtnail Skosan, under pressure from Conway, couldn’t gather. Amongst a thicket of Boks’ players, Conway snaffled the ball on the first bounce and in a flash had stepped Malcolm Marx to accelerate clear, running in untouched from 30 metres.

Sexton’s touchline conversion hit the upright, but Ireland, having created relatively little, were 14 points to the good.

The half ended with Sexton being penalised for taking out Leyds off the ball after Kearney reclaimed Sexton’s bomb and a good carry by O’Brien before an O’Mahony line-out steal gave Ireland one last shot, but Aki couldn’t pull in Stockdale’s pass.

The Boks re-emerged with renewed purposes, and after Francois Louw won a turnover penalty against Kearney for not releasing, Stander was done for a high hit on Mtawarira and Jantjies finally opened their account.

Rhys Ruddock replaced Peter O’Mahony and almost immediately won a penalty when strong in the jackal after Aki had scythed down Kriel, allowing Sexton made it 17-3.

Handre Pollard did inject some hard-running at outhalf, but when he went wide to Leyds, Stockdale lined him up and emptied him, also forcing a spillage. That prompted the biggest cheer to date of what had been a fairly unforgettable second-half, although after a triple Irish substitution, it was soon followed by a bigger one.

Stockdale made the initial incision, steaming onto Sexton’s no-look pass from a beautifully executed training ground move, and linked with Conway on the other wing. Conway did well, dancing infield and from the ruck Ruddock took Kieran Marmion’s second pass of the game to step Louw and take du Toit’s tackle to add to his try against the same opponents three years ago.

With this, Ireland had broken South Africa’s resistance and then broke free. From a Toner take, a perfectly choreographed five-man maul peeled off for Rob Herring to claim his first test try.

Mauled unceremoniously over their own line, for the Boks, that was the ultimate indignity, but more pain followed after another botched move by their backs. Stockdale started it by charging upfield and O’Brien rumbled off the base in full Tullow Tank mode, before Sweetnam, just on for his debut, did superbly to gather a cross kick by Joey Carbery, who had just been introduced.

After James Ryan trucked it up, the backs did the rest by sweeping the ball across the line for Stockdale to gather Henshaw’s skip pass and score. Carbery even landed the touchline conversion.