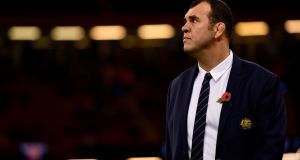 Michael Cheika, head coach of Australia after his team’s win over Wales at the Principality Stadium. Photograph: Dan Mullan/Getty Images

Australia will analyse and look to solve a season-high penalty count as they prepare for next Saturday’s Twickenham clash against England.

The Wallabies headed to London from Cardiff on Sunday after reeling off a 13th successive victory over Wales.

But head coach Michael Cheika was left concerned by his team conceding 15 penalties, while captain Michael Hooper collected a yellow card during a second half that Wales dominated.

“Consistency is what we are looking for,” Cheika said.

“We go inside the 10-metre, and we are penalised. Fair enough. Then two plays later, the linesman calls the referee and says the Welsh are inside the five-metre off a scrum and he says it’s all good?

“There was just so much commentary coming from the sidelines.

“We’ve got to solve a problem we haven’t had all year. We’ve not been in double digits almost all year, so to go 15 in our first game in Europe surprised me — and lose a player, too.”

Cheika, though, was pleased with Australia’s overall display, which saw them score four tries and also stack up defensively in a second period when Wales had more possession and territory.

“We had guys come back from injury, and I thought we showed a lot of character out there against a Welsh team that played quite well.

“We obviously had a huge penalty count against us as well, so we just showed a lot of character.

“When it doesn’t always go for you from your attack, which it really didn’t for us, your defence has to stand up and be your insurance.”

England and their Australian head coach Eddie Jones are next up for the Wallabies, and Cheika added: “We understand that the pundits over here don’t think we have much of a chance.

“They have already given England 3-0 (three wins) for November.

“One guy said, ‘All respect to Australia, but a decent club side would beat them’. So I don’t think there is too much for them to worry about.

“We will prepare every day like we are going to play our best game on Saturday, and go from there.”

Asked about his coaching head to head with Jones, Cheika said: “It is irrelevant. It is Australia versus England, that’s all that counts.

“It is not about fun with Eddie. We will have fun on our own in our own camp, and then we will prepare ourselves each day the best we can.”