England have already lost Billy Vunipola to a broken arm 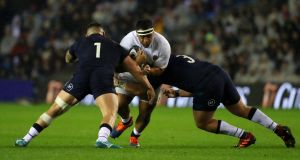 England’s Mako Vunipola has not been named in the 33-man squad for their game against Ireland on Sunday. Photo: David Rogers/Getty Images

England have received a huge blow before their crucial Six Nations match against Ireland on Sunday with Mako Vunipola ruled out, having travelled to Tonga for family reasons.

Beno Obano has been added to England’s 33-man squad in his place but Vunipola’s absence will be keenly felt given his performance against Ireland 12 months ago in which he made 27 tackles, 11 carries and was described by Eddie Jones as “top of the class”.

Vunipola was rested when England began their Six Nations campaign with a disappointing defeat by France but his return coincided with a victory against Scotland. Jones does at least have options at loosehead with Ellis Genge impressing off the bench in both Six Nations matches so far and Joe Marler also at his disposal.

In better news for England, Manu Tuilagi and Henry Slade have both been included in the squad after undergoing rehabilitation on respective groin and ankle injuries last week.

Tuilagi is considered eligible for selection after coming through a fitness session on Friday and his return is a major boost. He has played against Ireland five times, ending up on the winning side each time and like Vunipola he was one of England’s standout performers in the 32-20 win in Dublin last year. He was similarly impressive in the 57-15 World Cup warm-up victory at Twickenham in August. Given his litany of injury problems in the past, his latest setback in Paris raised fears his championship could be over so his return to fitness is a welcome boost for England.

Slade is also included after coming through a training session last Thursday. He is thought to be further behind Tuilagi in his return to fitness but Jones said last week that the Exeter centre had a chance of being available for selection. - Guardian