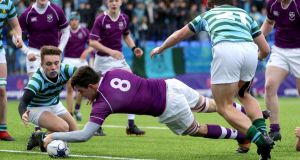 Diarmuid McCormack of Clongowes Wood touches down for a try during the Bank of Ireland Leinster Schools Senior Cup quarter-final in Donnybrook. Photograph: Bryan Keane/Inpho

Clongowes Wood avoided St Michael’s in the draw for the Leinster Senior Cup semi-finals after overcoming St Gerard’s in a 12-try quarter-final shootout at Donnybrook on Thursday.

The Clane school had to admit defeat in the failure of Tom Mulcair to come through late fitness tests. It didn’t seem to disrupt them too much, hooker Eoghan Cumbers making ground to build pressure that yielded an Oisín Devitt penalty in the fourth minute.

The knife-through-butter carry of captain Calum Dowling was improved when the ball was spun right for fullback Rory Morrin to cut back against-the-grain and feed wing Michael Spillane, who repeated that manoeuvre for the opening try, Devitt converting for 10-0 in the seventh minute.

The scores were piling up at a rate and it wasn’t about to stop anytime soon.

Centre Chris Grimes, number eight Diarmuid McCormack and prop Luke McMahon crunched through defenders to put Clongowes on the brink and hooker  Cumbers applied the heavy-handed finish, Devitt converting to make it 17-5 in the 16th minute.

It wasn’t all one-way traffic, the Bray school manufacturing space from the unorthodox passing of outhalf Patrick Burke for fullback Cormac Long to show his speed and openside Conor Pickering picked off a turnover to keep them chasing a response.

However, they paid a heavy toll for an overthrown lineout, Dowling seizing it to get involved for three carries in a surge that ended with McCormack scoring their third try and Devitt adding the extras in the 26th minute.

St Gerard’s were willing and able to muster their forces for loosehead Ledwidge to trigger an attack that enabled tighthead Brian Glass to burst over, Patrick Burke’s conversion reducing the difference to 24-12 in the 27th minute.

It wasn’t long before pressure led to a penalty and hooker Fred Happonen was stretching for the line to make it a one-score game.

On resumption, the patience of Burke to wait for the right pass was the key to Kenny pouncing for his second, Burke’s conversion making it all-square in the 40th minute.

When Devitt missed a penalty, Clongowes tightened up for the forwards to take control, replacement Harry O’Neill crashing over for Devitt to add the extras in the 50th minute.

The double-whammy was applied when Dowling careered forward for blindside Evan O’Boyle to be on hand for the fifth try, converted by Devitt.

By this time, Clongowes were coming in waves, lock Jack Kearney scything through for David Wilkinson to accelerate away, wing Seán Sexton sniffing out the seventh and Kearney the eighth.

Straight after, Leinster’s Will Connors and Rowan Osborne appeared pitchside to make the semi-final draw. Holders St Michael’s will play Newbridge, while Clongowes will face Castleknock in the first week in March.