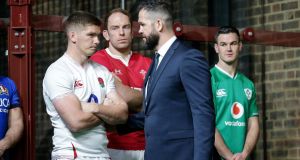 Ireland head coach Andy Farrell talks with his son and England captain Owen at the launch of the Six Nations. Photograph: Laszlo Geczo/Inpho

Andy and Owen Farrell have opposed each other before but this latest instalment on Saturday week is different. The Irish head coach is taking his team to Twickenham to face an English side captained by his son. Barring further re-matches between these two, it’s unlikely we’ll ever see the like again.

“I know, it’s weird, isn’t it?” admitted Farrell snr with a smile at the culmination of the Irish squad’s two-day camp in Cork -on Thursday.

Yet this is a proud if conflicting day for the Farrells, when you consider the journey they have taken since Andy and Colleen brought Owen into the world when still in their teens. From Andy’s stellar rugby league career in Wigan and Owen’s beginnings in that code, to their route south to Saracens and rugby union and, now, eventually, Sunday week.

“The hardest part is certainly for Colleen, yea, 100 per cent. And Owen’s sisters [Elleshia and Grace], and the young fella Gabriel, it’s weird for them. They’ve got unbelievably mixed emotions, I’ve no doubt, because they’re only human, but I suppose how do they try and come to terms with it? I suppose they think that, they hope that, both sides do well. And that’s not going to happen, is it? So it’s a difficult one for them.”

You’d venture that it’s a little more awkward for Farrell snr than it is for his son who, after all, can just go out and play like he always does. While Farrell has previously coached Owen with England and the Lions in his previous role as defence coach, they have opposed each other four times since the former joined the Irish coaching ticket after the 2016 Six Nations.

The score is two-two, with the first of those meetings in the 2017 Six Nations finale at the Aviva Stadium when Ireland’s 13-9 win denied England a second Grand Slam in succession.

“When was that? I can’t remember. Honestly, it’s been so many times now. I can’t even remember how it felt.

“You know what, I am proud of the situation, I am as far as a father and him as a son, I am proud of how it is handled, because it is one of the utmost respect, but of professionalism, first and foremost.”

Had Ireland beaten New Zealand in the World Cup quarter-finals, however fanciful that might seem in hindsight, they’d have been in opposite camps in the semi-finals. Instead, Andy stayed on with Colleen and Gabriel for the semi-final win over the All Blacks and defeat in the final against South Africa.

“Now that was tough,” he admitted. “Now I was back to being a parent again and that is tougher than being a coach against your son that is playing on the opposition. I actually did the whole fan-family thing that day on purpose, to get back to how it felt before all this even happened.

“I went on the train with the all the fans, enjoyed the atmosphere before the game, understood what it meant for my wife and the kids and that was tough because the nerves were through the roof as far as that’s concerned. But this is totally different. Totally different to that.

“Well you want your son to perform, don’t you? You speak to any parent who is watching their son play for Ireland at the weekend, your fingers are crossed, hoping it goes well. When you’re a coach, you don’t feel like that. You don’t hope it goes well, you’re assessing things and you’re seeing how the plan is coming together or not. So you’re busy in your mind as a coach, you’ve got a distraction.

“But when you’re a parent, and I’m sure all parents would tell you the same, you’re just watching your son. You’re not watching the game as much as you would do as a coach.”

Despite the historical rivalry, there’ll be plenty of supporters on both sides of the Irish Sea who will also be proud for the Farrells. Andy and Colleen both have strong Irish roots and it’s a reminder as to how inextricably linked the two countries have been, as well as the many mixed bloodlines. Circa six million people in the UK claim at least one Irish grandparent.

“We’ve family on both sides and we’re unbelievably proud of that,” said Farrell.

“I speak to all the Irish fans who love going to Twickenham and they tell me that everyone is unbelievably friendly, and that’s why they keep coming back for a great day out.”

The Farrells’ sub-plot is perhaps a timely celebration of these Anglo-Irish links and the sports’ values given some of the pre-match rhetoric in the Six Nations to date, with talk of hate particularly misplaced. Farrell would not be remotely inclined to use such words or like any of his players to do so.

“No. No, 100 per cent. The game’s tough enough, and there’s a mutual respect, 100 per cent, between the players, and the coaches as well. So I wouldn’t even go down that road.”