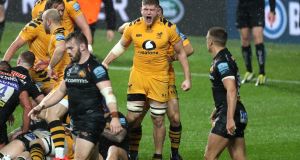 Wasps’ Jack Willis has been included in England’s squad for the autumn by Eddie Jones. Photograph: David Rogers/Getty

George Ford is unavailable for England’s Six Nations finale against Italy on Saturday through injury but Jack Willis could win his first cap after he was rewarded for his fine form for Wasps with a call-up to the squad for the coming autumn Tests. Willis is joined by his fellow uncapped Wasps team-mate Jacob Umaga, who is in contention for the matchday squad against Italy in Ford’s absence.

Willis and Umaga are two of seven Premiership finalists added to Eddie Jones’s 36-man squad along with teammates Joe Launchbury and Dan Robson. Exeter, despite adding the Premiership title to their European crown, provide just three players in Henry Slade, Harry Williams and the in-form second row Jonny Hill. Jack Nowell and Luke Cowan-Dickie are among those injured but both Joe and Sam Simmonds have been overlooked by Jones.

Joe Cokanasiga is included, having been overlooked for the mini camps so far with Ali Crossdale also missing out through injury. Elliot Daly (shin) and Joe Marler (knee) are also set to miss out against Italy.

It is Ford’s absence that causes the biggest headache, however, for Jones, who has already had to deal with the cancellation of Sunday’s warm-up match against the Barbarians. As reported by the Guardian last week, his achilles injury is proving problematic and means Jones’s captain Owen Farrell is likely to move to fly-half. Slade is another option, as is Max Malins, who is rewarded for his impressive performances for Bristol, but the 22-year-old Umaga is the only other specialist fly-half in the squad. To demonstrate how crucial Ford has been to Jones’s tenure, he has appeared in 53 of his 54 Tests in charge.

Wills’ inclusion was widely expected given how impressive he was in Wasps’ run to the Premiership final. The 23-year-old won an astonishing 47 turnovers this season and was crowned the RPA’s players’ player, the Premiership’s Player of the Season and Land Rover Discovery of the Season. He was picked by Jones for the tour of South Africa in 2018, only to suffer a debilitating injury soon after, ruling him out of action for nearly 18 months. Hill was also selected on that tour but did not make his debut, remaining an unused replacement in the third Test. With Courtney Lawes injured and George Kruis headed for Japan however, he has been given another chance.

In total there are nine uncapped players in the squad with Ollie Lawrence among the most eye-catching. Jones has talked up the powerful centre’s potential and with no Manu Tuilagi at his disposal and Farrell potentially vacating the No 12 jersey Lawrence could get his opportunity as early as Saturday. Ollie Thorley is the other uncapped member of the backs along with Umaga and Malins.

In the pack, Beno Obano is one of three loosehead props while David Ribbans is another potential debutant in the second row. He is joined by his Northampton teammate Lewis Ludlam who has had to miss out hitherto as part of the knock-on effects of the Covid-19 outbreak at Sale Sharks. Alex Dombrandt and Alex Mitchell are among the players to drop out from the squad who were due to face the Barbarians.

Jones said: “We have to put our best foot forward if we want to win the Six Nations. We need to set the tone of the game and we want to put a smile on fans’ faces, a lot of people are enduring hardships and we are grateful for the opportunity to represent England in these difficult times.

“We were obviously disappointed with the postponement of the Barbarians game but we moved to plan B, had a highly competitive training session instead of the match and now we are fully focused on the Italy game and the goal of winning the Six Nations. It was a tough squad to pick and I know there are a number of disappointed players that have just missed out. We’ve got a good balance between experience and inexperience.”

The recently appointed skills coach Jason Ryles will join up with the team for the start of the Autumn Nations Cup, after finishing the season and winning the NRL Grand Final with Melbourne Storm, where he was assistant coach. - Guardian