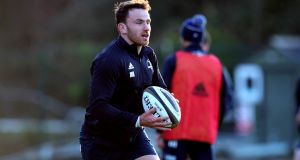 In a match of competing narratives the name of Joey Carbery among the Munster replacements will surely add to the festive cheer for both sets of fans in Thomond Park. It will be Carbery’s first appearance of the season whenever coach Johann van Graan decides to spring him from the bench.

The Irish outhalf has not been seen since October when he replaced Johnny Sexton on 62 minutes against New Zealand in Ireland’s last World Cup outing. Joe Schmidt’s side were trailing 34-0 at the time.

That is not the envisaged scenario tonight with both teams again delving into their squads with Munster making seven changes to the starting side that beat Connacht last week and Leinster aiming to take their unbeaten run this season into a new year.

“For the last few months I can’t assess much,” said Contepomi. “He hasn’t been playing that much but of you ask me about Joey Carbery he is a great footballer. Whatever team he plays in would be delighted to have a type of player like him. If he comes in it is good for him. He could definitely be a threat. But it is just one more piece of the puzzle.

“He is definitely much faster than me,” added the Argentinean. “Joey didn’t play that much last year and I haven’t coached him every day so I saw on TV. He is a great player, instinctive. Sometimes as a 10 you need more structure as well.”

Carbery and Hanrahan will face Ross Byrne, who comes in this week for his impressive younger brother Harry with Ciarán Frawley also hoping to get game time at outhalf as Leo Cullen rotates the squad through the three interprovincial matches.

Sexton remains sidelined with a knee injury picked up against Northampton in the European Champions Cup. But Byrne has recovered from a dead leg and mans a backline festooned with threats in fullback Hugo Keenan, Adam Byrne and James Lowe on the left wing.

Jimmy O’Brien also starts at outside centre. His try against Australia in 2018 playing with the Irish sevens team shows that given any space he will take it and few will catch him. In that aspect he may benefit from the fine offloading game of Conor O’Brien lining out beside him.

The pack is laced with experience with both Devin Toner and James Tracy in treble figures for Leinster appearances. Toner, who partners Scott Fardy in the secondrow, is about to earn cap number 242.

It’s unusual for Munster to be the underdog in Thomond Park. But that’s the way the season has panned out as Leinster with a record six league titles are looking good to add a seventh. In the last three matches they have averaged 49 points each time.

Like Leinster in Conference A, Munster are Conference B leaders and will be looking for some sort of way to avenge last season’s semi-final defeat to the champions and perhaps cement their intentions to claim this season’s championship title for the first time in nine years.

It’s a first derby match for the former Wallaby, Stephen Larkham, who has been trying to build in changes to Munster’s attacking play. Thus far that has been inconsistent with two wins in the last five games in league and cup.

“It is great. As a rugby player it is one of those atmospheres that is great to play in. I have been in some other big derbies, like Stade-Racing. Being able to be part of a Leinster-Munster game, it is one of the biggest derbies in world rugby by far.”

Irish under-20 and Sevens player Shane Daly starts alongside Munster’s centre pairing of Sammy Arnold and Rory Scannell with Dan Goggin on the right wing. Billy Holland captains with Munster’s strong backrow of Tommy O’Donnell, Chris Cloete, Jack O’Donoghue knowing the breadth of the challenge against Leinster’s Josh Murphy, Will Connors – in just his 12th outing – and Caelan Doris.

There are three Munster Rugby Academy players named among the replacements, Ireland under-20 Diarmuid Barron, who can play hooker and backrow, South African-born prop Keynan Knox and Jack O’Sullivan, who made his first start for the province in their 28-12 win against Ospreys in October.

With only one defeat in their last six against Munster, Leinster will travel to Limerick with a well-founded attitude that they are probably the best team in Europe at the moment. For Thomond Park at the end of December they will need every ounce of that confidence to keep their winning record intact.