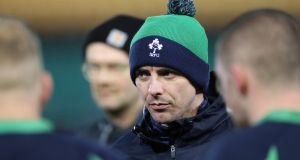 The Ireland under-20 team will train at the National Sports Campus on Tuesday as they await an official update on the status of Friday night’s game against France U-20s at the Stade Aimé Giral in Perpignan. The expectation is that the game will be postponed but discussions between the French government, the French Rugby Federation and Six Nations Rugby are ongoing.

The Irish 20s are due to fly to the south of France on Wednesday so the lingering uncertainty is an unwelcome distraction. Noel McNamara’s charges are unbeaten in the tournament to date, gathering maximum points from victories over Scotland, Wales and England in following on from last season’s Six Nations Grand Slam.

The team was due to face Italy at Musgrave Park last Friday night but that match was postponed at the same time as the announcement was made about the senior and women’s internationals.

“I think from the perspective of the development of the group and improvement in performance you would have to say there has been a lot of growth from game one through to the most recent game. In terms of where we are at now, we are in a pretty good place. It’s been a really positive start to the championship and we are looking at completing that at some point.”

If Friday night’s game is postponed there will be one or two additional issues in trying to re-fix both the Italian and French matches when set against the fact that the majority of the squad will sit college exams in May. As things stand there is considerable doubt as to whether the World Under-20 Junior Championship will go ahead in June and July as it is scheduled to take place in northern Italy.

“We are still looking forward to finishing the championship. For us it is about continuously improving, trying to work hard and find that improvement,” said McNamara.

“In terms of looking forward I definitely think that we have a number of players that are capable of stepping up to the next level and I have no doubt that over the course of the next weeks and months that hopefully some of those players will get an opportunity with their provinces. Equally looking forward into next year you have a number of players here who can make that step up.

“For us I think it is important to state, yes it’s disappointing but it is no more than that. The reality is that the health and safety of the public is paramount and that has to be the number one priority. It’s just important to have real clarity on that.”

The Clare native was typically modest when asked about being nominated as February’s Signify manager of the month. “To be honest it’s an accolade for a team, a reflection of the work done at medical, strength and conditioning and video analysis level. We’re a group of 11 people who have prepared this team. And to be honest it extends beyond that.

“A lot of work that’s done in growth and development of these players happens at provincial level, happens at schools and clubs. The players really are a credit to all the people who have been involved in their journeys.”

When asked about his personal sporting interests he offered a topical vignette in Cheltenham week. “One of the best things I did over the last 12 months was I went to visit Willie Mullins’s yard down in Carlow.

“I taught Paddy [Mullins] in school, believe it or not. He was a good middle-distance runner. When you talk about high-performance environment, that’s an outstanding example of how to prepare and train and how you get better. You try and learn from other sports.”

Bale and Dele Alli score as Tottenham qualify with draw in Austria 21:12
Connacht use visit of Benetton to give as many players as possible match time 20:51
Celtic surrender two goal lead in AC Milan defeat 20:16
Fans told not to excessively sing or hug as Premier League crowds return 20:02
Gillane’s chances of playing against Waterford rated ‘50-50’ 19:20
Crossword Get access to over 6,000 interactive crosswords