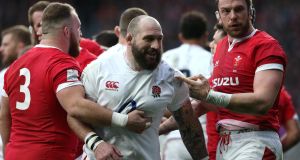 One of sport’s innumerable charms is, of course, its unpredictability. So, if you’re claiming you forecast that the major talking point to come out of the weekend’s Six Nations action would be the squeezing of Alun Wyn Jones’s crown jewels, and that the incident would result in a debate between Joe Molloy and Ronan O’Gara over what percentage of people found it funny, then Mendacious is your middle name.

Joe, to be honest, didn’t look at all comfortable discussing the matter in the immediate aftermath of the incident in the England v Wales game, Joe Marler being the offender, and while his panel had an almighty giggle when he raised it, they were divided when they put their serious heads on to discuss whether:

b) It wasn’t a hoot, but it was harmless

c) It was outrageous, and worthy of a lengthy ban.

“On the one hand we can be too po-faced, on the other, it’s not good,” said Joe. “Ah, let’s not be too po-faced… he knew what he was doing, it was for a laugh,” said Shane Horgan. “Kids watch this, you can’t do that,” said Matt Williams. Ronan, meanwhile, just kind of stared in to space, in a ‘why are we even talking about this?’ sort of way.

Over on ITV, meanwhile, Mark Pougatch was asking his panel whether they were opting for (a), (b) or (c), Gareth Thomas choosing (d). “It would never have happened in my day,” he said, “and I’m really upset about that – if it had, I would never have retired.”

Clive Woodward laughed so hard he almost did himself an injury, but come Sunday, by which time quite a lot of people had gone for (c), Thomas had to take to the Twitter to almost say he was sorry. “To the VERY small minority of people who were offended by my comment yesterday I apologise,” he said. “I tried to find humour in a situation – that doesn’t mean I condone it, it means I wanted it to not be an issue.”

Some time later, Marler took to the same platform. He was contrite. Kidding. “Bollocks. Complete bollocks,” he said in his three-word statement.

Joe most probably hoped that the issue had been comprehensively dealt with on Saturday, but he felt obliged to return to it on Sunday, reminding his panel that rugby rule 9.27 says “a player must not do anything that is against the spirit of good sportsmanship including but not limited to grabbing, twisting or squeezing the genitals”. You could see the pain in Matt, Shane and Ronan’s eyes.

But Matt was sticking to his guns – “it’s a shocking look for our sport and a terrible example to kids out there playing the game” – as was Shane – “it wasn’t a malicious act, it wasn’t to inflict pain or injury, it was him trying to be funny” – as was Ronan.

Ronan: “There’s a little bit of a sense of humour involved in it.”

Joe: “That crossed the line, that’s not funny.”

Opinion was similarly 50-50ish over on the BBC where John Inverdale came perilously close to using the ‘snowflake’ word. “Should we be discussing this? Do we need to discuss this? Probably these days we have to discuss this. In this day and age is that not an assault?”

Andy Nicol was not amused. John Barclay thought it was “a storm in a teacup . . . it’s not nasty, it’s a bit of fun”. To which Thomas Castaignede replied, “it’s a strange way to have fun”. Paul O’Connell went for the ‘cool the jets’ option: “It’s inappropriate and he shouldn’t have done it, but for him to be suspended I think would be a big disappointment.”

That this whole boy-centred crown jewels debate was taking place around International Women’s Day was unfortunate. For some decorum, then, it was best to switch over to the Arnold Palmer Invitational on Sky where our commentators Mark Roe and Rich Beem were having the chats.

“You’ve got soft as you’ve got older,” Mark said to his colleague. “Listen,” said Rich, “there’s a lot of me that’s been soft for a while, especially in the mid-section.”