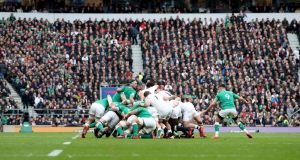 Strong sanctions – including cards – change behaviour, chat does not. That was very clear in England v Ireland, the scrums were a mess. Photograph: Dan Sheridan/Inpho

The scrum. Not an easy topic and my limbic-residing inner chimp is demanding that I flee from it. But here goes.

Since professionalism, there’s little doubt but that the scrum has been hijacked.

Look back for a moment. In the amateur days, it was used as an attacking weapon by such scrum gurus such as Roly Meates. What could be better than having eight of your opponents tied down in one place and a lot of space to exploit? Fast ball, fast attack.

In 1995, as rugby was moving into professionalism, the World Cup final saw the scrum with the ball thrown in more or less straight, props propped and hookers hooked. That was the norm.

Bit by bit, things went awry. Remember that notorious period when the opposing packs charged at each other from a distance - matches were ruined by continuous free kicks, penalties, and endless resets. Winning the “hit” became the byword, it was shambolic.

Thankfully, we now have a situation where some teams have reverted to using the scrum for attack. Ireland are a positive scrummaging force and the work that commenced under Joe Schmidt and Greg Feek should continue with Andy Farrell and John Fogarty.

And take Leinster’s success, their positive use of the scrum is for a proven reason. The problem is too many teams and coaches prefer to disrupt, collapse, and generally screw up the scrum.

Other very strong scrummaging teams want to shunt their opponents downfield to manufacture a penalty. That’s all very well, except that the advancing scrum is always rewarded, even if it’s their own front row players who cause the break-off. Teams know that and play for it.

Get a shove on and you’ve all the “rights” to the subsequent penalty. That can’t be right.

This is aided and abetted by what is, at best, a token strike as the ball is shovelled into the second row. This allows a coach to select, effectively, three props. The days of the skilful hooker are no more.

The well-worn question of responsibility for instability – tighthead or loosehead? – really comes down to two very important reference points.

Firstly, the non-throwing-in loosehead must push straight and not move his hips out to his left. If he does, it’s illegal, penalty kick. Secondly, If he pushes straight, the opposing tighthead must not fold in under the pressure. If so, he’s the one to be pinged.

We have seen poor scrums in the Six Nations so far. In the Pro14 and other elite competitions they can be a nightmare.

One of the major problems is the speed and force of the engagement, which has been measured at over 100 per cent higher than before professionalism; and with packs now weighing in at around 900kgs it’s easy to see why basic stability is a problem.

Research has shown that a passive engagement of the scrum today generates about the same force as a normal engagement of yesteryear.

So, without moving to a static rugby league-type scrum, part of the solution may well be something more passive – with teams flexing into their shoving positions on the referee’s “set”’ call.

Very often we see front rows engage with their feet too far back, or up on their toes – it’s impossible to hold their weight in these positions.

The hooker must now place one foot flat on the ground, it’s termed the ‘brake’ foot – look out for it. But it’s not really that innovative, the laws have always required all front row players to support their own body weight on at least one foot. Is that really happening?

The Italian tighthead (in the game against Scotland) had his feet so far back that all he could do was flop to ground, pancake-like. It was an extreme, but good, example of his utter inability to support himself.

Using the current laws and common sense, it seems that an engagement process with front rows having feet flat to the ground needs a lot of consideration.

The team that gets its weight “on” first can dominate the scrum. If it’s the throwing-in team, they can control what happens next. If it’s the defending team then they can ‘bunch’ the opposition front row and cause real problems with a straight drive.

Look at England. While their scrum was pulverised in the World Cup final, they still managed to get their weight on first in one scrum. South Africa went backwards.

So, while the scrum is not supposed to start until the ball leaves the scrumhalf’s hands – those irksome forgotten laws again – there’s a hell of a lot going on before that happens.

Let’s get the referees to speed up the scrum formation, cut down the number of resets, and go to sanction decisions sooner. It’s really a nonsense for a referee to repeat the message he’s already given prior to kick-off.

The first two scrums in Ireland’s game against Scotland took over four minutes. That’s a lot of so-called “ball in play” time down the drain.

Strong sanctions – including cards – change behaviour, chat does not. That was very clear in England v Ireland, the scrums were a mess.

Some conversations have thrown up ideas such as limiting the wheel and the distance a scrum can advance; also requiring the ball to be played away once it’s at the feet of the number eight.

While depowering, to some extent, big scrummaging teams, these would help stop the scrum being used as a penalty provider which it was never designed to be.

Also, let’s face it, vital scrum decisions are often open to debate. Wales v Scotland saw one such key moment. Ireland v Wales resulted in World Rugby agreeing that the referee was mistaken in a critical scrum decision. It’s not a good situation.

It must be made easier for referees who have an impossible job to deliver coherent and consistent scrum decisions.

The unquestionable reality is that the scrum needs a serious fix.