Coronavirus: Ireland’s Six Nations clash with France has been postponed 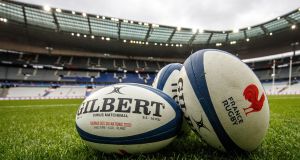 Ireland’s Six Nations clash with France in Paris on Saturday has been postponed due to coronavirus. Photograph: James Crombie/Inpho

The Six Nations have confirmed that the France-Ireland game which was scheduled to conclude the 2020 Championship in the Stade de France next Saturday has been postponed.

Confirmation of this anticipated development came on Monday afternoon, after the Six Nations released a statement on the back of advice received from the French Government.

The statement read: “Following instructions received from the authorities in France, the decision has been made to postpone the Round 5 Guinness Six Nations match between France and Ireland. We are still awaiting confirmation for the Women’s and U20s fixtures.

“The fixture between Wales Women and Scotland Women is also postponed after a Scottish player tested positive for Covid-19 and a further seven members of the Scotland camp (players and management) are self-isolating.

“Six Nations and its constituent Unions and federations will work closely to identify dates on which all postponed matches will take place. No immediate announcement will be made on rescheduling as we will need to discuss with all relevant stakeholders and assess the evolution of the situation.”

Playing Saturday’s game behind closed doors, as will be the case for the PSG-Borussia Dortmund European Champions League tie on Wednesday, would have cost the FFR an estimated €2.5 to 3 million.