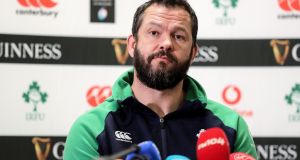 Ireland head coach Andy Farrell: “We don’t know where we are going to be in a month’s time, do we? Never mind in a few moths time.” Photograph: Laszlo Geczo/Inpho

The Irish team trained in Sports Campus Ireland on Monday morning before being told at around lunchtime that their game against France at the weekend in Paris had been officially postponed.

Following the postponed match against Italy last week, that leaves two matches to be slotted into the autumn schedule. But that too is still up in the air.

In a statement on their website the Six Nations also said they “are still awaiting confirmation for the Women’s and U20’s fixtures.” The Irish women are scheduled to play France in Lille this weekend and the Under-20’s face the French in Perpignan.

“It is what it is,” said Irish coach Andy Farrell. “You can’t do anything but the right thing. The reaction of the players when we’ve come back off a good morning’s work was one of deflation a little bit. Gutted. We’ve built up for a couple of weeks on the back of a disappointment and we were looking forward to the week ahead.

“We were literally on the training field going through our prep for this afternoon and tomorrow. We had some good chat setting up our week nicely and we’ve come off the indoor training field and we get the news.

“We have to make new plans and we’re still in the process of doing that. We were literally told 10 minutes ago. The lads will have a weights session this afternoon. There’s a unit session and skills session along with that but we’ll reassess that when I finish with this press conference.”

It has been a weird debut season for Farrell, who had hoped to end the championship on an upswing after the disappointment of losing to England. But he was adamant not to let it affect him and holds to the view that the championship is still alive and Ireland can still win it.

“It is what it is,” said Farrell. “I’m not getting too disappointed by it. There’s nothing you can do about it. We can only control the controllables. We plan on doing that.

“You guys judge it on performance in the cold light of day and so you should. But we know where we’re trying to go and we’re making progress there. And that’s what adds to the frustration of not being able to show that this weekend.

“We felt we had a good plan this week and we used the weekend to plan properly and we were bouncing into this week. It’s not the norm for any of us.

“We’re more than in,” he added. “We’re in control of our destiny. The Six Nations is unbelievably difficult. Everyone judges on performance but we’re two from three as other teams are. And some are below that.”

Dates have not been set for when Ireland will play Italy and France. Ireland have three international matches scheduled for November against Australia, South Africa and Japan. A decision will be taken on whether two more Six Nations games can be accommodated in that schedule.

“Look, we thought we had two games to play before the Australian tour,” added Farrell. “But that’s not to be. The boys will slot back in with their provinces in the not too distant future. And there will be some big games coming up between now and Australia [this summer].

“We don’t know where we are going to be in a month’s time, do we? Never mind in a few moths time. We’ll just roll with it and see where we go.”