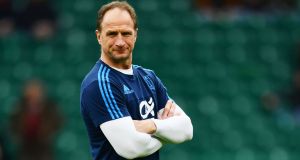 Jordan Larmour shakes his head and says: “No, not really.” Memories in his 23-year-old mind of seeing Mike Catt playing rugby do not exist.

For Larmour and his age group that would frame Catt as very much the Irish attack coach with a respected past but without the immediacy or recall that chime with his many years at the cutting edge as an international player.

The Leinster fullback was six years old when his coach won the World Cup with England in 2003. Catt came on for centre Mike Tindall in the extra-time phase of the game to play alongside outhalf Jonny Wilkinson and Will Greenwood in England’s midfield.

It was said afterwards that Catt had come on to take the load off a heavily targeted Wilkinson with his kicking game, ability to move the ball wide and irrigate the backline. Catt later modestly responded that nobody needed to act as a crutch to the best player in world rugby at the time.

What he did give to England in many matches alongside Wilkinson was credible options. With flankers and anyone else constantly pouring in on the England outhalf to cause maximum disruption, Catt divided attention and man power. Wilkinson was a kicking mark on one side of the scrum and Catt on the other.

All that is too long ago for Larmour to have seen first hand how the Catt miaowed in a career that occasionally see-sawed along. He complained of being labelled South African when he played badly or missed a kick but English on the open-top bus with the Web Ellis Trophy.

“Not being English born-and-bred, I think that sways the press,” he said in 2006. Not here.

More than a decade ago a column written in The Guardian was headlined “The Catt with Nine Lives.” It revolved around how occasionally he had been discarded by teams only for coaches to keep returning.

That was born out when Catt played in his fourth World Cup in 2007, four years after winning it. He was 36 years and one month old making him the oldest to play in a Rugby World Cup final. When he retired he was capably self-aware, enough at least to call his biography “Landing on My Feet.”

As a player it would not have been wrong to call Catt a centre but in the purest form he was a genuine utility back. He played for England at fullback, outhalf, in the centre and on the wing, the only England player to fill all the back positions at test level.

“He’s a very chilled out guy,” said Larmour after his first interaction at Sports Campus Ireland in a pre-Christmas Irish session with the new coaching team. “Overall I’m looking forward to the chance to work with him.”

Austin Healy wrote in his Daily Telegraph column about his first impressions shortly after Catt, born in Port Elizabeth to an English mother and South African father, arrived in England.

“He rocked up with a pair of white-tasselled loafers, white socks and jeans that were skin tight, which in 1992 you just did not wear unless you were in the Bee Gees,” wrote Healy. “He could not have been less English and yet was one of England’s best-ever players.”

As a central figure with Bath for 12 years, London Irish for six and England for 13, at 5’11’’ he had to be nuanced and influential. It was a trait some coaches did not appreciate.

Those who preached a bish, bash, bosh philosophy had no time for Catt’s craftsmanship and particular ability to draw those around him into a match. Tindall did the straight up game for England just fine.

I love World Cups. They are a bit of a drug. For me.

The arrival of former Australian hooker Mike Foley, who came to Bath in 2001, triggered a playing philosophy clash and one of the main reason’s Catt left for Irish in 2004.

In the past Catt critics have claimed footage of the 1995 World Cup semi-final against New Zealand should have been an existential threat to his career. Catt laughs at it now as Theatre of the Absurd, as he might an old news reel of an Olympic athlete puffing on a cigarette just before running in the mile final.

It’s a sequence of Will Carling sprinting across the pitch from the left, Carling diving and clipping the heel of the force of nature on the New Zealand left wing.

Jonah Lomu then stumbles forward into the England 22 and off balance runs over the approaching England fullback Catt, Ha-ha, for his first of four tries in an England rout. But Catt’s 75 England caps is kind of the last laugh.

Japan in 2019 with Conor O’Shea and Italy was Catt’s sixth World Cup appearance.

He played in four, and was also part of the England coaching team with Stuart Lancaster and Andy Farrell in 2015. After England failed to make it out of their pool, the first host country ever to depart the tournament at that stage, England replaced the coaching staff with Catt hastily cast out before hooking up with Italy.

But O’Shea says they scored a historical high number of Six Nations tries in Catt’s three years with them. The former Irish fullback frames him as an energy giver, an extrovert and a coach who at 48-years-old can still ably demonstrate the skills on the training ground. He can say and show.

Over the past few months the Irish players and staff have been trying to fathom the Catt character, personality and playing philosophy, which has been shaped by former Ireland, England and Bath coach Brian Ashton.

That despite a double-page headline in a British tabloid that serialised Catt’s autobiography in 2008. It accused Ashton of “No Direction, no tactics, no belief and a coach in a state of confusion, how did England ever get to the World Cup final.”

Catt claimed misrepresentation, something Lancaster knows all about. The Leinster coach unequivocally believes that his former assistant will greatly benefit the Irish players, having first worked with Catt eight years ago.

“He joined the England coaching team when Andy Farrell was unavailable for 2012 South Africa tour,” says Lancaster. “With Faz being unavailable because he was with Saracens, I took Mike and he had gone from a player-coaching role into a coaching role at London Irish.

“So, it was great for him to come and have that experience. But when Andy joined the team full-time, he then stayed in the coaching team as a skills coach.

“So, effectively he was responsible for developing the skills of the forwards and the backs within the England setup between 2012 and 2015 and obviously the World Cup.

“He has obviously got great vision for the game. He was a great player. He is very good on the detail of attacking play. He would be very good on helping players improve their decision-making, very good at getting players to be better at scanning and seeing opportunities.”

His arrival in Ireland to join Farrell – with Lancaster and Graham Rowntree also involved at provincial level – has triggered a proprietorial take from some English media, who look across the Irish Sea in delayed wonder. Despite the immolation of all three post-2015 World Cup failure, the question is how it was their best coaches are siding with Paddy to have a crack back at England.

“I thought he really grew into the role,” says Lancaster of Catt’s time with England. “Obviously when I left, he left and did three years with Italy. I think that would have helped him as well.

“I think it’s a really, really good appointment by Andy. They get on well, they will work well together. He is very extrovert in his personality, so I think he will bring a positive energy around the group. I met him a couple of times since being over.”

Catt has won three Premierships and the European Champions Cup in 1998 with Bath. He has won four Six Nations with England. He has been on two Lions Tours in 1997 and 2001, winning in South Africa in 1997 and he won the 2003 Rugby World Cup.

It’s an honours list as long as that of his boss and “Man of Steel” Farrell. As players they are probably the most qualified partnership in Irish rugby history.

Larmour may never have purred over Catt as a player. Maybe that’s as it should be and usually how it breaks in teams.

“He’s brought a few new things in that got us [Ireland] thinking again,” says the fullback.