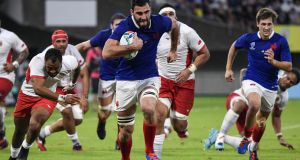 New France coach Fabien Galthie named a young 42-man squad spearheaded by Charles Ollivon for this year’s Six Nations as Les Bleus will look to restore some pride after years of disappointment.

The squad, with all but one player under 30, features 19 uncapped players for the championship, which they will begin against England at the Stade de France on February 2nd.

“We focused on the strengths we had without solely focusing on England. Our choices are balanced with an average age of 24. We are aware that it’s a young and inexperienced squad,” Galthie, who was Jacques Brunel’s assistant coach at the World Cup, told a news conference on Wednesday.

France were knocked out in the quarter-finals in Japan and they have not won the Six Nations since 2010.

“We want to give these players the desire to become a great nation of rugby again,” said Galthie.

Wing Yoann Huget, fullback Maxime Medard and lock Wenceslas Lauret have been omitted from the squad.

“We needed strong players on board with our project and Charles has the capacity to assume the skipper’s responsibilities,” said Galthie.