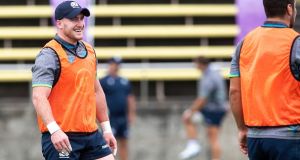 Stuart Hogg has been appointed as the new Scotland captain. Photograph: Getty Images

Stuart Hogg has been appointed as the new Scotland captain for the Six Nations, the Scottish Rugby Union has announced.

The Exeter fullback takes over from Stuart McInally, who led the team out during last year’s disappointing Rugby World Cup campaign.

With 71 caps, the two-time British and Irish Lion is the most experienced player in the 38-man squad named by Gregor Townsend for this year’s championship, which starts for Scotland with a trip to Dublin on February 1st.

McInally was named as captain ahead of former skippers Greig Laidlaw and John Barclay as the team flew out to Japan. But the Edinburgh hooker had a disappointing tournament and was left out of the starting team as the Scots saw their hopes of reaching the quarter-finals evaporate with defeat to the hosts in their final pool match.

Laidlaw and Barclay have since announced their retirements from international action and Townsend has now decided it is time for Hogg to take over.

Townsend has also handed a recall to centres Matt Scott, Huw Jones and Rory Hutchinson after all three were left out of the squad that travelled to the Far East in the autumn — but Saracens’ Duncan Taylor is a notable absentee.

Explaining his captaincy call, Townsend said: “Stuart is very passionate about playing for Scotland and he’s determined to do all he can to improve Scotland. He really cares about playing for his country, what the jersey represents and also getting the best out of his team-mates.

“He’s a really intelligent rugby player who’s is learning and improving with every season. He’s very good at bringing others into the game and building relationships with those around him.

“He’s very well respected by our coaching and playing group but that isn’t based on the accolades he’s earned. It’s more about what he does every day at training.”

Townsend added: “He brings energy, is very accurate, he stays out longer to work on his game and more often than not he’s the loudest player on the field, guiding or congratulating his team-mates.

“He really wanted to take on the honour and responsibility of being captain, which was a huge positive and — having heard his plans for how he would work as a captain and work to bring the best out of others, while being able to focus on his own game — meant it became a relatively straightforward decision.

“We will have a strong group of leaders around him that can help but it’s a new squad and a new era, and Stuart has an opportunity to help this group reach its potential.”