Ireland v All Blacks - who should start this weekend? 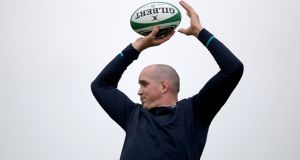 Devin Toner made a big impact coming off the replacements bench against the Pumas. Photograph: Dan Sheridan/Inpho

This being the Ireland team we think Joe Schmidt will name, it won’t be the side that takes the field against New Zealand next Saturday night. Schmidt and injury always throw a curve ball. The big decision is lock where Iain Henderson, despite consistently performing to a world class standard, gets dropped as Devin Toner’s lineout and aerial dominance at restarts becomes crucial against Brodie Retallick and Kieran Read (who chases every kick off with kamikaze intent).

Also, Tadhg Beirne’s form demands inclusion. Rob Kearney has to return for his defensive and positioning excellence but Jordan Larmour should hang onto the 23 jersey for some X Factor off the bench. Despite an unquestioned ability to lead, Rory Best’s place must be under serious review. Sean Cronin and Niall Scannell haven’t done enough quite yet to dislodge the 36-year-old but the World Cup seems very far away.

If fit, Garry Ringrose returns at outside centre while Robbie Henshaw’s injury makes Bundee Aki the sensible selection. Dan Leavy gets the nod over Josh van der Flier because he’s better and for his openside clinic against Argentina.

Injury colours this week’s pick. If Garry Ringrose and Rob Kearney are fit they will play. No one knows the exact state of fitness with Kieran Marmion also limping off in Aviva Stadium. The All Blacks will raise their game. Ireland need players who are consistent and can sustain the high playing tempo that New Zealand prefer without breaking down or making a misstep. For that Schmidt reverts to trusted campaigners and he’s right to do that. But he also needs form from the scrappy dug out match of last Saturday.

Devin Toner made an impact. So did Dan Leavy. Bundee Aki played well. The wings struggled to get into the game as Ireland were too narrow. Will Addison came from not being in the match day squad to starting for his first cap and looked the part, growing into the game. Johnny Sexton can play better. The pack were strong, especially James Ryan, but Rory Best was not at the top of his international game. Talk of Tadhg Beirne seems premature. Schmidt cannot drop his locks, Toner, Ryan, Henderson as they have all delivered on demand.

Events, dear boy, events, as Harold Macmillan once put it to a journalist when asked what can most readily derail a government. And events have conspired to possibly alter, or at any rate clarify, three or four of Joe Schmidt’s selections for next Saturday.

That Sean O’Brien and Robbie Henshaw have joined Conor Murray on the sidelines means that Dan Leavy, Bundee Aki and Kieran Marmion should all start. Leavy and Aki are two of Ireland’s best carriers and Marmion acquitted himself well against the Pumas. Luke McGrath upped the tempo, but in many respects a replacement scrumhalf should always do that.

Fit again, Garry Ringrose had to return anyway, as his distribution, outside break and defensive reads adds more balance to the Irish attack.

As everybody saw, the value of Devin Toner (on both Irish and opposition throws and at restarts) was enhanced in his absence for the first hour against the Pumas, and line-out ball is this Irish team’s oxygen.

Likewise, the aerial duels were hugely significant at both the Aviva and Twickenham, and Rob Kearney’s presence would restore composure, albeit with less of a game-breaking threat. But Jordan Larmour’s footwork, pace and versatility make him the best fit at ‘23’.

There would be an argument for Tadhg Beirne on the bench, although Henderson is way more familiar with the systems, and Josh van der Flier always delivers.

Injuries to Robbie Henshaw, Sean O’Brien and Conor Murray clarify the selection process to a degree while it is presumed that Rob Kearney and Garry Ringrose are match fit. Kearney’s prowess in the air, positional play and experience in a contest of this ilk will be important, while Ringrose’s appreciation of the 13 role in attack and defence coupled with his innate ability will add value, particularly in attack.

Kieran Marmion was excellent last weekend, quick to the rucks and covering intelligently but Luke McGrath’s physical presence in defence, support lines and ability to snipe on the fringes, makes a more persuasive argument to start him when the collisions are at their fiercest. Marmion, as he has in the past, can provide his team with a slightly different type of game, coming off the bench.

Ireland rely heavily on their set piece prowess from which to attack and Devin Toner will be a pivotal figure in that respect. New Zealand gorged on England’s frailty out of touch. Dan Leavy was excellent last week as a replacement, while on the bench, it really depends on Ireland’s game plan. Ballast could see both Iain Henderson and Tadhg Beirne included; a more fluid approach decree that in-form Josh van der Flier or Rhys Ruddock make the replacements.

“Learned helplessness” is a concept I’ll visit on Friday, but it does influence team selection this Thursday. How ruthless the ‘ruthless pursuit of excellence’ influences Joe Schmidt’s team selection remains to be seen. How accommodating Irish selection is to the rusty nature of last Saturday’s unit play is also important. But selection leans on psychology, culture and leadership and all must be balanced.

The lineout requires three elements - personnel, management and execution and with this in mind Devin Toner must start. Not because he’s the best in the air (Peter O’Mahony wins that award) but because he’s the best lineout manager in managing an extremely complex pressurised environment and especially the throwing trajectory style of Rory Best. Long gone is the simple BIG, RED, HAT lineout options where the opposition are now often ahead of your ideas; hence O’Mahony’s outrageously regular lineout steals. Our hooker will need management and a deeper lineout arc to beat them.

If Toner starts then so does Best. But if Toner starts so too can Niall Scannell as his performances thus far have been worthy of inclusion assuming the outrageous impact role for Sean Cronin continues. With the versatility in the starting backrow then I’d definitely have both Tadhg Beirne and Ian Henderson on the bench.