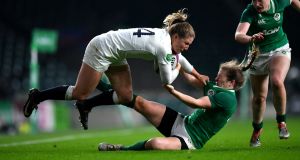 England’s Lydia Thompson is tackled by Lauren Delany of Ireland during the autumn international at Twickenham. Photograph: Dan Mullan/Getty Images

Lydia Thompson scored a second-half hat-trick of tries as England pulled away from Ireland in the second half of the autumn international at Twickenham on Saturday.

England had led just 15-10 at half-time after Ireland responded to early tries from Heather Kerr, Kelly Smith and Vickii Cornborough with two of their own through Eimear Considine and Lauren Delany.

Thompson put England back in charge with two tries in quick succession after the break and completed her treble late on after a Claire Molloy reply.