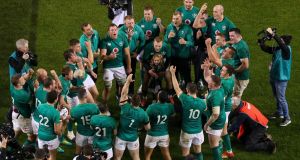 It’s one mark of how far this Irish rugby team has risen that, during the desperate last moments of their latest win over New Zealand, many home supporters had the nerve to sing.

The Fields of Athenry is usually reserved for occasions where victory or defeat – it works equally well for either – is already certain, not the nerve-shredding times when fans find themselves in between.

But in the closing minutes of Saturday’s game, the All Blacks could still have snatched a draw that would have seemed crushing. And we had the scars from 2013 to remind us they would attack to the end.

Even so, fans in the Aviva Stadium chose this moment to launch yet another chorus of their unofficial anthem: “Our love was one the wing/We had dreams and songs to sing.”

It was as if they knew that, this time, this Ireland would not yield. Sure enough, it was the mighty visitors who cracked instead, to lose to the national team on Irish soil for the first time.

Our love had not been on the wing for the actual game, at least not in the starting 15 named by Joe Schmidt. But thanks to Jacob Stockdale we had the next best thing. The Ulster wunderkind had a mixed night, including a misjudged kick that almost gave the visitors a try.

In sporting slang, he “got out of jail” then. And not since Nelson Mandela has anyone exploited release from incarceration to such dramatic effect.

First Johnny Sexton and Bundee Aki wrong-footed the defence with a classic switch to put him away. But wrong-footed or not, there were still several pairs of All Black legs, and a matching number of arms, between Stockdale and the line. Then he chipped the ball over them, and chased it like an electrified ferret.

But they time they caught him, it was too late, as momentum and the roars of the crowd carried him over.

For the sheer noise that surrounded it, the game bore comparison with one from 17 years ago, in the old Lansdowne Road, when Roy Keane took a short cut through Holland’s Marc Overmars en route to propelling Ireland to the 2002 World Cup.

This time, it was another indomitable Corkman Peter O’Mahony who set the tone. He seems to have personally inherited all the hunger of the song Irish supporters love to sing.

Meanwhile, if they’re inspired by the famously low-lying fields of east Galway, this Irish team continues to ascend new heights. The All Blacks remain the world’s official number one, but only just.

Like their countryman Edmund Hillary on another famous climb, they have close company on the final approach to the summit of next year’s World Cup. Ireland’s sherpa Tenzing Norgay could yet get there first. Even around Athenry, the oxygen is getting thinner.