Ireland football is where Ireland rugby was 20 years ago: in the doldrums

Sideline Cut: On a night in November 1997, two Ireland teams set off on wildly different paths 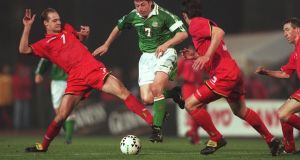 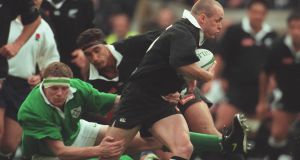 Time’s a goon. On Saturday, November 15th, 1997, the All Blacks came to Dublin to play in Ireland. The following Monday, an excited headline across the front page of the sports supplement in The Irish Times read: “The future can’t come fast enough.” Unfortunately for the IRFU and the Ireland rugby stars of that era, it referred to the Republic of Ireland football team.

On the very same date as the national rugby team were thumped 63-15 in Dublin, Mick McCarthy’s Ireland team faced Belgium in the second leg of a play-off game on a rainy night in Brussels. The prize was a place at the France ’98 World Cup. The first game had finished 1-1 in Dublin. The return game grew into one of those unbearably operatic occasions at which the Republic of Ireland teams specialised: for a full decade, they were matched only by the Druid theatre in their talent for leaving their audience emotionally shattered after a couple of hours of undiluted escapism.

That night in Brussels had it all: a 2-1 cliffhanger (3-2 to the Belgians on aggregate), a controversial refereeing performance (Gunter Benko), an Irish dismissal (David Connolly), a few tantalising almost-goals and a bravura performance in goal by Shay Given, then just starting out on a career that would span three decades.

Ray Houghton hadn’t been chosen on the first eleven: instead, he came on and scored one of those huge goals of his, scores that seemed to generate enough emotional power to kick-start the national economy. It wasn’t quite enough. Roy Keane, then one of the best midfielders in the world, was a crucial absence in both legs. Belgium edged it in heartbreaking circumstances, but the Irish boys had left it all out there. It all took place in purifying rain and, afterwards, Irish tears were shed.

The result marked the finishing post for several key figures of the Jack Charlton era. Late that night, Andy Townsend quietly announced that he was finished. Afterwards, as journalists gathered around, Houghton threw an arm around McCarthy and told the gathering that not starting him had been the right decision. It was a moment of solidarity between two old pros. McCarthy grinned. “Aye, and I was looking for an argument as well, mate,” he said.

Houghton began to walk away and then turned to lob a grenade of small mischief. “I was good for half an hour, though,” he called out. It was Houghton’s last appearance. Dublin airport was deserted when the team came through arrivals some time after three in the morning and, in a nearby hotel, McCarthy held an impromptu press gathering while he thought about the what-ifs over a pint of Guinness.

As it turned out, Ireland’s subsequent campaign for Euro 2000 would be characterised by further sliding-doors moments. Davor Suker’s 91st-minute goal in Zagreb denied Ireland a valuable goalless draw in September 1999 and, one month later, Goran Stavreski scored in the 90th minute to cancel Ireland’s 1-0 lead in Skopje against Macedonia. But for those goals, Ireland would have gone through as group winners: instead, they finished one point behind Yugoslavia and lost out to Turkey on a play-off.

Only in McCarthy’s third campaign – and again after a play-off – did the future that couldn’t come fast enough actually arrive, in Saipan. And that’s when the fun really started.

Following the Republic of Ireland in the McCarthy era was interesting and provoked emotion; the team may not have been hectic, but its campaigns had momentum. The national rugby team, meanwhile, seemed caught in a routine of underwhelming acceptance that nothing could change. That had been the strangest thing about New Zealand’s visit to Lansdowne Road on that Saturday afternoon. It was, in the truest sense, an exhibition. Everyone knew the All Blacks would win and the fans came to support the home team, yes, but mostly just to watch the visitors execute a game that was painfully superior in its clean simplicity and technical proficiency and speed.

The All Blacks scored a record number of tries in Lansdowne Road. The disturbing thing for Donal Spring that afternoon was that there was “no disappointment” in the stadium. The mood was quiet, almost detached. There was a general acceptance that this was just where Irish rugby was. The result left one unavoidable question hanging: Could Ireland ever compete with these guys – and if so, how?

Over the next two decades, the IRFU would slowly begin to address that question. Worse humiliations would follow in the subsequent years. But the pattern of the best rugby players signing contracts with English clubs slowed and then stopped. A framework revolving around three strong provinces (Connacht wasn’t in the thinking then) began to yield results: Ulster became European champions less than two years later.

The promotion and marketing of the game underwent a startling transformation. The Munster revolution gave way to the Leinster transformation and, after the IRFU gave Connacht a sense of stability, the game began to thrive in the Sportsground. Irish teams would endure torrid afternoons against New Zealand even after Irish rugby had become an efficient operator (60-0 as recently as 2012). But those one-off results didn’t seem to matter as much because Irish rugby was responding to long-term objectives and baseline performance rather than to the burst of adrenaline created by results.

The best young players were funnelled through schools and provincial academies, earning senior provincial and international caps and the contracts that went with those. Irish players became embedded in the national consciousness like never before: Drico, Shaggy, ROG, Paulie – warriors on the field and beloved caricatures on Ian Dempsey’s morning radio show.

The Irish stars became brilliant at saying absolutely nothing of interest very fluently. The brilliant old quip of the difference between the state of English rugby (always serious, never fatal) and Irish rugby (always fatal, never serious) became redundant. Irish rugby had become an extremely serious, smooth and highly ambitious professional outfit, based on gate receipts and a production line of players and performance. If you told the crowd in Lansdowne Road that afternoon in 1997 that within 20 years Ireland would beat New Zealand twice (and deny them a single try in one those victories) and would go into a World Cup as second favourites, they’d have looked at you in pity. That would have been impossible then.

Since the sombre departure of Martin O’Neill and Roy Keane was announced on Wednesday morning, the conversation has revolved around whether the team can qualify for the European championships in 2020 – and who the right man might be to achieve that. Almost by accident, the Irish football scene has become a recurrent pantomime, ever since Scotland’s Gary McKay scored the goal that sent Jack Charlton’s team through to the historic European championships in 1988.

Nothing has changed. It’s the same voices and the same problems and the same reliance on lurching from game to game, hoping against hope that those Shane-Long-versus-Manuel-Neuer or Ray-in-Stuttgart moments will always drop from the heavens just because the team and the manager and the supporters love Ireland so much that it hurts. The FAI and Irish football finds itself precisely where the IRFU and Irish rugby was on that November weekend two decades ago. This is a low. But it is also an opportunity to acknowledge that the model for success, in so far as it ever existed, is broken.