Head coach Andy Farrell says he is looking to James Lowe, who has qualified to play for Ireland on the three-year residency rule, to bring an "extra dimension" to his side's play ahead of the Leinster winger's international debut. Video: VOTN 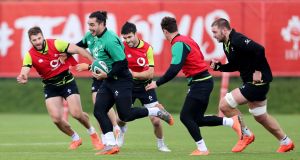 James Lowe will become the 11th player to represent Ireland through the residency ruling since the start of the 2013-14 season when he makes his Test debut against Wales on Friday. Few, with the possible exception of Bundee Aki, have generated more excitement than the 28-year-old Leinster left-winger.

All told, 110 players have been used by Ireland in that time-span; or, to put it in further context, of the 1,783 caps awarded in those seven years, only 140 have been earned by players who’ve qualified through the residency ruling, which is less than 8 per cent.

True to type, a year ago Lowe himself described the ruling as “weird” and “stupid”, and admitted that World Rugby’s decision to extend the qualifying period from three to five years from January 1st, 2022 onwards, having suspended this extension for a year due to the coronavirus pandemic, is more “reasonable”. He is thus likely to be the last player to represent Ireland by dint of the three-year qualification period.

Nonetheless, he will have been chuffed when Andy Farrell revealed the make-up of the team to play Wales before training on Tuesday.

We have all seen him play in the Pro14 and what he brings for Leinster, so hopefully he can definitely bring the same

“I suppose that players do get a little bit of a sense of how things are going – not that I actually went over to him and told him,” the Irish head coach revealed. “What I like to do with new caps is for them to find out the same as everyone else when the team goes up and they finally see it. It’s the right way to do it in my mind. They see the team like everyone else and hopefully it’s a good feeling when it’s announced for them.”

Farrell is as excited as anyone about the prospect of Lowe bringing his powerful carrying, finishing ability and infectious energy to this Irish team.

“He brings an extra dimension to how we want to play. We have all seen him play in the Pro14 and what he brings for Leinster, so hopefully he can definitely bring the same. Hopefully too, on top of that, with a good performance at the weekend, that he brings another dimension and competition for places in our squad which is very important for us going forward.”

Although Lowe’s defensive game has had its quirks, no one can doubt his attacking ability. The sense of anticipation will be as acute amongst supporters and teammates, especially in Leinster, where Lowe has scored 33 tries in 49 games.

Garry Ringrose, who admits it is unlikely he will feature in this upcoming Autumn Nations Cup due to the broken jaw he sustained in the win over Italy, has welcomed Lowe’s promotion warmly.

Ringrose is grateful merely to have opposed Lowe in training, but confirms that the Nelson-born one-time New Zealand Maori winger is just as competitive during a match week.

“Thankfully, training is rarely full-on contact, so I avoid that side of things. But he is exceptional – the ability he has out on the wing. From a Leinster perspective, he has certainly done some special things on the pitch, in big pressure moments as well. I have no doubt he will rise to the occasion.”

He is gifted in how he plays, some of the things he does, I would certainly love to be able to do some of that

So what is it about Lowe?

“I don’t think anyone in there relies solely on natural talent. Everyone works incredibly hard, including myself. He has got a good left boot on him, he has got us out of trouble, but he practices kicking them all of the time.

“As I said, you might not be able to do full contact in training, but he would never just go through the motions. You can see him kind of visualising that kind of match mentality. He is gifted in how he plays, some of the things he does, I would certainly love to be able to do some of that. But he works incredibly hard as well. Even in my short time in camp, even though he knew he couldn’t play, he was still giving his all in training.

“He is also a charismatic guy. It’s no secret that he is charismatic and an unbelievably positive guy to have around others. He also has a huge impact in that regard as well.”

With Keith Earls back in the matchday 23 and Jordan Larmour due back in the new year, suddenly the competition in the Irish back three is ferocious. Virtually as soon as he landed, it was only a question of when. Now Lowe’s time has come.

Ringrose and Aviva were launching a competition giving supporters the chance to sing Ireland’s Call alongside the Irish Rugby team before they take on Wales in the first match of the Guinness Series, this Friday, November 13th.

To enter the competition, fans nationwide and abroad are invited to email irelandscall@whpr.ie. Successful applicants will have their version of the anthem played on the big screen as Ireland line up to sing Ireland’s Call prior to kick-off against Wales.