Hugo Keenan has sights set high as he continues ascent 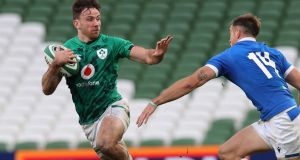 Four years ago in their opening match of the Under-20 World Championship in Manchester, Ireland conceded three tries in the first quarter and trailed 17-0 against Wales, who had beaten Ireland 35-24 the previous February en route to winning the Grand Slam. Their goose looked well and truly cooked.

As will be the case tonight, Jacob Stockdale was at fullback that day, with Hugo Keenan on the right wing this time as opposed to the left that day.

“It was the first game of the World Cup and tails were down,” recalls Keenan as the Irish regrouped for their third restart in a row. “The big moment of that game, I remember it well, James Ryan was playing and he went to Bill Johnston and was like, ‘stick the restart on (Welsh number 8) Harrison Keddie’. James tore after it, hit him man and ball, got a knock-on and I think we scored a couple of phases later. That was one moment that really stood out for me in that game and then I think we got on the front foot then.”

Indeed, a couple of phases later Johnston landed a drop goal with a penalty advantage to open Ireland’s account and they recovered to win 26-25, thanks in large part to two tries by Stockdale in quick succession either side of half-time.

They followed that up with a historic win over New Zealand, then the reigning Under-20 world champions, and Georgia, and thrashed Argentina in the semi-finals before losing the final to England in Ireland’s best Under-20 World Championship campaign.

“I suppose if you lose that game against Wales then we probably wouldn’t have reached the final so it was a huge turning point. There was Shane Daly as well in that side and (Andrew) Porter, so there’s a good few of us coming together. Will Connors was injured that year so it’s sort of cool making the step up with those lads. You know them that extra bit well and it makes it more enjoyable around camp,” says Keenan.

It perhaps says something about Ireland’s provincial pathways that Keenan, Stockdale, Porter and Ryan all line out at the Aviva Stadium tonight, whereas the only Welsh player from that game who’ll they encounter is the fearless flanker Shane Lewis-Hughes, who won his first cap a fortnight ago against Scotland.

Stockdale had a huge tournament, also scoring two tries in the semi-final win over Argentina and Keenan is very impressed by his progress.

“He’s been training so well. He’s a world-class player and himself and James (Ryan) and (Andrew) Porter, six months later they were in an Irish squad. He’s some player in fairness to him.”

By contrast, Keenan and Connors had to take a more circuitous route via the Sevens programme while also suffering setbacks with injuries, but watching his former Under-20 teammates make more rapid progress didn’t add to Keenan’s frustration.

“No, it gave me confidence,” he says. “Seeing those lads making the step up so soon makes you realise that international 15s is not far away - that it’s a possibility and sort of in your sights. I suppose those lads had the physical ability. They’re all freaks in fairness to them, so they made that transition a bit quicker than the likes of Will (Connors), myself and Max Deegan. But no, it definitely inspired us, 100 per cent.”

During Ireland’s famous win over New Zealand in that World Championship the team’s then head coach Nigel Carolan recalls a key moment when Keenan chased a high kick.

“He launched himself without regard for his body to win the contest. He ended up getting buckled but he won the ball back!

“I’m a huge fan. He is a silent assassin in my opinion,” adds Carolan, echoing the exact same description that Porter used. “While his personal demeanour is quiet, soft spoken, supportive, relaxed and diligent, on the rugby pitch he is brave, committed, determined, ruthless and dogged.

“When he was with the under-20s he was still developing, but he was already a super finisher, brave under the high ball, reliable in defence, a cool head on the ball and had a solid kicking game. He was as tough as nails and put his body on the line but was rarely injured.”

Keenan was always regarded as brave.

“I suppose it’s something you don’t really think about when you are a kid,” says Keenan. “You’re giving it your all every time.”

Although there’s speed in the Keenan gene pool too, this was something he also developed during his later years in school with the help of Blackrock’s then athletics coach, Dave Sweeney.

“But I started out as an outhalf. It was only really when I was 16, 17, 18 and I moved into the back-three that I got quicker and faster. I put in a good bit of work into it back then, so that has stood to me a good bit, and I suppose half of it is natural as well.”

He has no idea what his best 100 metre time is, admitting: “I was more of a 400 and 800-metre lad in school. Nick Timoney from Ulster, the number 8, in fairness to him, he was the fastest in my year back in sixth year. He won the sports day 100-metres, so he holds that over me to this day.”

While Keenan has said “it’s been a long journey” he describes his run of games with Leinster and now Ireland since resumption as “a bit of a rollercoaster”. After that two-try debut against Italy when unluckily denied a third after a thrilling counter and pass from Stockdale (ironically for blocking by Ryan) came the disappointment of Paris.

“That second half was very tough,” he admits, adding: “They’re obviously so good in the loose and the broken ball plays. It’s tough when they’re on the front foot. The likes of (Paul) Willemse and (Virimi) Vakatawa, they’re big, big men so it’s that extra bit of contact. It was a bit of an eye-opener to what international test level is really like.”

At least this renewal with the Welsh at the outset of a new tournament has come quickly.

“It’s a fresh slate so a great opportunity to bounce back straight away. That’s what the guys have been saying. Normally at the end of a Six Nations you’d be going back to your provinces and I suppose finishing with a defeat could linger over you for a while. But we’ve got a great opportunity this Friday to right those wrongs and get back into the swing of things and hopefully get a bit of silverware over the next couple of weeks.”