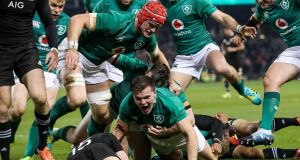 Ireland’s Jacob Stockdale celebrates scoring their first try with Josh van der Flier in Ireland’s victory over the All Blacks at the Aviva. Photograph: Gary Carr/Inpho

For a moment in the changing room below the West Stand in Aviva Stadium, it could have seemed like he had abandoned all lack of pretension and was talking about himself in the third person.

“Mostly he’s very soft spoken . . . he won’t over talk. He knows what’s best for the team and he always gives his all. When you see the performances he puts out and how much effort he puts in every week and how he trains . . .

“He’s a massive competitor. You see his work at the breakdown. Every week he’s brilliant. He puts in a shift every time. He gives his all.”

Josh van der Flier has never cut himself adrift from his public and private mooring of basic virtues. If modesty or humility were flaws the openside flanker would be the most disfigured player on the Irish team.

Van der Flier was talking all right. But his bouquets were being slung towards Rory Best and the Ireland captain’s big uncle soft shoulder and understated menace. The words also fitted van der Flier’s own performance levels, which we now know possess a number of gears even in the thin air of the All Black jet stream.

More comfortable clocking out on his own inspiring body of work and upping the shift of the Ulster captain, van der Flier’s re-emergence should never have happened even if Dan Leavy had not been ruled out for Ireland’s historic win.

In a sequence of divine good fortune and a plague on a couple of houses van der Flier found himself in the biggest game of his life. But he should never have been there at all.

Seán O’Brien broke his arm early in the match against Argentina and opened a door for Leavy, who came in and was at his mongrel best. There was enough of a steely glint in his eye for Joe Schmidt to keep him there; a prize fighter’s start against the All Blacks.

But Leavy’s battling temperament left him with “full body soreness” soon to be officially diagnosed as a neck strain and at short notice van der Flier was elevated from the bench into a starting position.

While he and the Ireland team doffed their caps with a step towards the All Black haka in a respectfully defiant gesture, it might have occurred to the Leinster flanker that he still had a couple of days to go before his original comeback date from injury fell due.

Van der Flier hobbled out of Ireland’s 15-13 Six Nations win against France in Paris on February 3rd with a serious knee injury, with the IRFU announcing the following Monday that the backrow forward was to be ruled out for the remainder of the campaign. He had ruptured his anterior cruciate ligament.

The diagnosis was lousy and medical opinion later had him making a comeback to club rugby on a date closer to December than October.

“I don’t think it’s the 20th yet so obviously it’s a good bit ahead of schedule and testament to the work they [Leinster and Ireland medical staff] put in.”

Through diligence and intensive rehab, the word was van der Flier’s return to fitness was progressing better than expected. His comeback finally arrived for Leinster’s Pro14 clash with Dragons at the RDS in September. He played the entire match with Max Deegan at six and Jack Conan at number eight.

At the time words like “unbelievable” and “amazing” were tripping from the lips of Leinster coach Leo Cullen. Work ethic and detail settled around van der Flier like a halo.

“We said it when he came back from his injury, a lot of guys are out nine months plus with that same injury. He’s so meticulous in everything he does,” says Cullen.

“We saw that when he came back, the volume of work he was able to get through those first few weeks.

“He’s been very, very good for us. He’s such a good pro. He’s prepared his body so well. It’s something he’s been doing for years now. Day in, day out he’s making the right choices. He’s getting better and better.”

Last Saturday evening when Jacob Stockdale scored the only try of the match against New Zealand, it was the red scrum cap of van der Flier, who had pulled himself from the trenches to be the first player up to pat the big Ulster winger on the head.

It didn’t happen by accident. Both Cullen and Schmidt have seen and listened to the engine turnover in matches.

“He wasn’t necessarily the most talented player coming into the academy,” adds Cullen. “He certainly wasn’t the player everyone was saying ‘watch this player coming through now’.

“There was a lot more unknown about him so he had to go through a slightly more difficult route to get there. Once he’s been in there he’s incredible.

“All through his injury he was looking at what he could do what he could improve on, talking to lots of current players, former players guys who have had the same injury, other backrowers. He’s a fairly unique character.”

So he has proven. Now in possession of the seven shirt, van der Flier won’t talk himself up. But it’s also proving impossible to keep him down.