Larkham signals Australia will reshuffle for final Test against Ireland 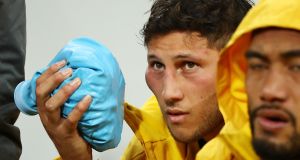 Australian assistant coach Stephen Larkham has forecast changes to the Wallabies match-day 23 for the final Test, suggesting some replacements may be promoted to the starting line-up in addition to Nick Phipps, the replacement scrumhalf for Will Genia.

Genia’s broken forearm will sideline him for six weeks, but lock Adam Coleman is confident he will complete the return-to-play protocols after suffering concussion, but not facial damage, after his clash of heads with teammate Israel Folau.

“I expect there will be really good fight in the team this week, it’s really good preparations for the World Cup isn’t it?” Larkham said. “We’re going to make a few changes this week. It will be really good to see the resolve of the guys. It was the first time since Cheiks’ been involved with the team where we went with the same 23 two weeks in a row and I think it’s time to give some other guys an opportunity. I think some guys who came off the bench played exceptionally well.”

The hard-edged Coleman stood up groggily after the clash with Israel Folau and left the field with a swelling the size of a golf ball in Melbourne, but maintained: “It’s fine.”

“It’s obviously a big knock on the head but I’m training and getting through it. I will be fine for the weekend if I get selected. I’m currently going through all the HIA protocols to make sure I’m sweet for the weekend. I just remember trying to make a tackle . . . and then I got the top of Izzy’s head on my cheek bone. I came off second best.”

Something of an enforcer, Coleman said the Wallabies need to address several failings from their second Test defeat.

“For us, it’s making sure that we do the little things a lot better than we did in that game. In areas of that game, we lost our way and it’s about making sure we potentially exit a lot better.”

Phipps will make his 29th Test start for the Wallabies on Saturday, but his first on Australian soil since the Test series defeat to England two summers ago.

“It’s a massive game, which is awesome, and good to see the boys really rising up for this one and looking forward to the battle ahead,” Phipps said. “You’re filthy about it for 24 hours and there’s no point kicking stones and moping around about it. You’ve got to get back into it and get straight back onto the table . . . a lot of learning, a lot of conversations around the place and opportunities for some blokes to stand up this weekend. The boys want nothing more than this. It’s something that is really important to us. Spirits are high.”

Much of the debate since last Saturday’s second Test in the Australian media has been about the aerial duel, part prompted by Larkham stating the Wallabies would talk to the match officials about Irish players blocking or “escorting” Folau to reduce his impact in the air last Saturday.

Defender Dane Haylett-Petty said: “They made some changes and we didn’t execute as well as we did in the first game, so it was a little bit of both. We knew they were going to change a few things and they definitely did that.”

With regard to the “escorts”, the winger added: “They did do that quite well, so we’ll make a few slight changes this week. We know that’s a strength of ours so we’ll definitely be sticking with that.”

It was suggested to outhalf Bernard Foley the Wallabies became a little fixated with the aerial bombs as opposed to varying their kicking strategy.

“It’s all in balance. We saw how they changed their approach and they had two guys always escorting Izzy and not allowing him to get that contest. When we recognise that we’ve just got to have variation, know our balance and know what other kicks we have.”