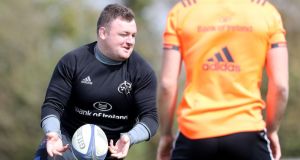 Dave Kilcoyne has joined the Ireland squad ahead of the final Test against Australia this Saturday. Photo: Bryan Keane/Inpho

Dave Kilcoyne pitched up to train with the Irish squad in Sydney on Tuesday but his name has not, as yet, been officially added to the 32 players originally selected for the tour. Kilcoyne happened to be “travelling” in Australia, while the Ulster-bound centre Will Addison has also been training with the squad since the beginning of last week.

But while Kilcoyne’s presence is merely a coincidence, the Munster loose-head does add cover for Healy were he ruled out for the injudicious 76th minute yellow card he incurred last Saturday if Jack McGrath, ala Sean Cronin for that fateful 68th minute scrum in the first Test, were to pay the ultimate price. Given how well he played otherwise, that seems unlikely.

Regarding Kilcoyne’s presence, forwards coach Simon Easterby said: “He has been in for just today. He’s not been made officially part of the squad. He was travelling.

“He’s not been officially named in the touring party, but he is available as he’s Irish-qualified,” added Easterby with a wry grin of the 22-times capped Kilcoyne.

Dan Leavy (sternum) and especially Andrew Conway (hip), neither of whom trained on Tuesday, appear to be bigger concerns.

“Cian trained, Dan we managed a bit but he did some stuff. Andrew is still carrying quite a nasty hip pointer but the way they’ve presented themselves 48 hours post-game is very encouraging. We’re pretty happy with the availability of training today but also the way the players have shown up today and even the guys that have carried some serious bumps from the weekend are looking far better than expected.

“No one is ruled out yet,” said Easterby, who confirmed that Ireland will not be going into the third Test with the same matchday 23.

“I think there will be some changes, whether that’s the starting team or the bench. There’s always going to be an opportunity through a three-Test series, not only through injury but also through our need to try and get some exposure for some of the more inexperienced players on a tour like this. We’re not that far out from a World Cup and this has been a great tour for us to get to know players who we’re maybe not that familiar with and get some game time and training time with those players.”

Rarely does a test week go by in Australia without the Wallabies bringing up some perceived illegal tactics by their opponents. This week their backs coach, Stephen Larkham, has complained about Ireland blocking Israel Folau in his chasing of high balls last Saturday.

It’s a common enough tactic by pretty much every team on the planet, and one rarely brought to public life, although Warren Gatland did so on the Lions tour of New Zealand last summer, and with some effect.

The Wallabies are set to speak to match officials about it, according to Larkham. “It’s in our hands, it’s something that we have to sit down with the referees and discuss,” he said.

“They might have a different opinion and every team in world rugby uses it and every team in Super Rugby uses it as well. But for us I think it’s two-fold. It’s one, getting the kicks accurate so that our chasers aren’t running between two or three guys, and then to bring it to the referees’ attention just to make sure that everything is legal there.”

Larkham also suggested they would be highlighting Ireland’s work in defence at the breakdown.

“I think Ireland did a fantastic job at slowing the ball down and again you’ve got to look at their tactics and say: is it something we need to bring up with the referee?”

When this was brought to Easterby’s attention, he said calmly: “We’ve done nothing that we haven’t done all season. I just think on the weekend we just showed a lot more urgency to get back and support the player receiving the ball, making sure that once that player has caught the ball and landed, that we resource the ruck. I think that was an area that we came off second best in Brisbane.

“There will always be things that the opposition and ourselves feel that we maybe didn’t get the rub of the green on but we’re just asking the players to work incredibly hard to support those guys who are receiving the kick. That’s all we did on the weekend. We didn’t feel like we didn’t do anything that any other team in the world isn’t doing.”

CJ Stander was asked for his observations on the debate and said: “It’s the first time I’ve heard that but look, for us as a team the main thing is the ball. We make sure we get the ball on the first hand and we work towards the ball every time as quick as we can. If players don’t get behind the ball and make sure we secure the ball, then we’re going to be in trouble.

“Coming from a blocking side, there’s nothing really specific we do from any other week. We’ve always been about making sure we get as close to the ball as we can to maybe get a ricochet or make sure we catch the ball clean.”

Regardless of the outcome this Saturday, one of the positives to emerge from this tour is how well Rob Herring and Niall Scannell have acquitted themselves in the absence of Rory Best.

“We set out on this tour to expose and get some experience for players, build some combinations. Certainly the hooker position is one because of Rory’s unavailability has allowed us to see a little more of Niall and Rob Herring, along with Sean Cronin,” said Easterby.

“It’s a position of strength for us at the moment but a position that we feel some of the younger guys haven’t had that much time with us and haven’t had much Test match experience. When Rory became unavailable, that allowed us to select a group of players that we knew we could give opportunities to.

“Through the course of the last few weeks, I think those players have stood up, Scans and Rob Herring, two guys we’re not as familiar with as we would be with Sean Cronin who we know exactly what he can do.”

The presence of Addison since early last week is testimony to the regard in which Joe Schmidt holds the versatile 25-year-old, who can play on the wing or full-back but is primarily seen as a playmaking centre. The Cumbrian-born product of the Sale academy played over 100 games for the club and also played for the English under-20s, but is Irish qualified through his mother, who hails from Enniskillen. He’s had a couple of injury-disrupted seasons, but for the past 12 months had been Sale’s club captain. His presence here would strongly suggest he will come into the squad during the November window.

“Certainly, in Will’s case, he was over visiting family and he had an opportunity to come in,” said Easterby. “And I guess when you’ve got someone who’s moving to Ulster and is Irish-qualified and we had the opportunity to get him into the squad was good, and for the players to meet him. It was quite a useful time for him and for us to see him in action.”