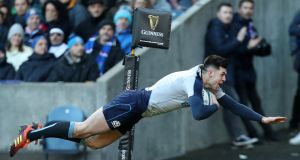 Scotland’s Blair Kinghorn touches down for one of his three tries against Italy at Murrayfield. Photograph: Ian MacNicol/Getty Images

Blair Kinghorn scored Scotland’s first ever Six Nations hat-trick as they kicked-off this year’s tournament with a 33-20 win over Italy.

It is 30 years since Iwan Tukalo registered their last Championship treble in a Five Nations clash with Ireland.

But Edinburgh wing Kinghorn ended that long wait as Stuart Hogg and Chris Harris also crossed over the whitewash to give Gregor Townsend’s side the perfect start with a bonus-point triumph.

Italy skipper Sergio Parisse was making a record 66th appearance in the Six Nations but it turned out to be another day to forget for the long suffering Azzurri skipper.

Conor O’Shea’s team did pull three scores back through Guglielmo Palazzani, Edoardo Padovani and Angelo Esposito in a chaotic final 10 minutes for the Scots but it was not enough to prevent them slumping to their 18th straight defeat in the competition.

Townsend had spoken earlier this week about the need for his side to build early momentum if they wanted to make a run for the title and Scotland were quick out of the blocks.

They thought they had a third-minute opener when Grant Gilchrist crawled over from a lineout drive but referee Luke Pearce left the hosts disappointed as he penalised the Edinburgh lock for a double movement.

Instead it was the Scots who found themselves behind after Jamie Ritchie’s tip-tackle on Parisse handed Tommaso Allan an easy penalty.

But it took just 12 minutes for Scotland to finally make their breakthrough. With the Italians over-committed down the right, Finn Russell exploited the space on the other side as he floated a perfect cross-field kick into Kinghorn’s hands, leaving the big wing to dart home unchallenged.

Kinghorn had more work to do nine minutes later but the result was the same as he again pounced over in the left-hand corner.

Tommaso Castello’s knock-on gave Scotland a scrum five yards out from which they quickly worked the ball out wide through the hands of Russell and impressive debutant Sam Johnson. Hogg did Kinghorn no favours with a terrible pass that landed under his feet but the pick-up and finish was impeccable.

Greig Laidlaw, who missed his first conversion, this time nailed the extras from out wide but Scotland failed to keep their foot on the gas and that gave the Italians some much-needed respite as they held on for the half-time whistle trailing 12-3.

However, Scotland’s show of mercy lasted just seven minutes into the second period as Hogg added the third.

Tommy Seymour carved the Azzurri apart with a marauding charge and as the visitors scrambled for cover Russell dinked a grubber in behind. The race was on between on Hogg and Esposito but it was the Glasgow fullback who applied the all-important downward pressure with his fingertips.

Laidlaw’s conversion opened up a 16-point lead but the bonus point was the prize Scotland were really after and it arrived in the 54th minute as Kinghorn wrapped up his treble.

Russell did brilliantly to scoop up a wayward Josh Strauss pass. Ritchie then rammed forward with another impressive run before Laidlaw handed off for Kinghorn, who was unstoppable as he slid over yet again.

Some the shine was taken of Scotland’s win as they fell asleep in the final 10 minutes, however.

With Simon Berghan sent to the sin-bin, Italy took advantage of their extra man as Palazzani, Padovani and Esposito were all allowed to scamper home.