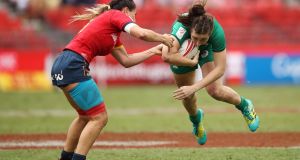 Ireland’s Eve Higgins is tackled during the quarter-final against Spain at the Sydney 7s at Spotless Stadium. Photograph: Brendon Thorne/Getty Images

The Ireland Women’s Sevens guaranteed themselves a first top-four finish after they defeated Spain 22-7 in today’s quarter-final in Sydney.

It will be Ireland’s first semi-final appearance when they face hosts Australia on Saturday night (10.56pm Irish time). Today’s win also sees them finish as the top European side in the competition.

It was 19-year-old Eve Higgins who claimed Ireland’s first score against Spain, receiving the ball from a scrum on the 10-metre line before jinking her way through the Spanish defence and using her speed to touch down. Captain Lucy Mulhall converted to make it 7-0.

Higgins again caused problems for the Spanish as she found herself in space metres from the line, but the final pass didn’t go to hand.

Spain conceded a penalty on the half-time hooter and Mulhall made the decision to put her side two scores ahead and struck the ball through the posts to make it 10-0.

Anna McGann returned in the second half from a two-minute sinbin and made up for her indiscretion by carrying hard into contact, sucking in Spanish defenders and creating space out wide for her team-mate Amee-Leigh Murphy-Crowe to exploit and go over for her fifth try of the tournament. Mulhall converted to put Ireland 17 points ahead.

A well worked team try followed, with Hannah Tyrrell and McGann both carrying smartly to attract defenders. The ball was worked to Murphy-Crowe who had some work to do to touch down, but her hard work ensured she closed day two as leading try scorer at the Sydney 7s.

As Anthony Eddy emptied his bench, Spain claimed a consolation try, but the victory was secured.