Remorseless Ireland have the smarts to manipulate England’s defence

Visitors bring heavyweight pack with lots of ballast, a mix of brute force and creativity 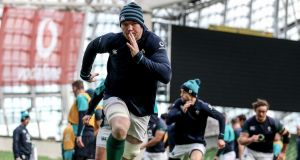 This is different. Invariably it has been Ireland hunting an English scalp. Somehow that always sat better. History and all that. But nothing is forever, and certainly for the first time since the 1970s, when Ireland won this fixture five times in a row and when England must have been really bad, it’s the other way around.

Ireland are top dogs and England are underdogs.

Ireland now hold World Team, Coach and Player of the Year, and are the reigning Grand Slam champions. And it’s also the first time the countries have met on the opening weekend in Dublin since 1995.

England coming to town has always been the big one, and this 2019 Six Nations opener features the countries who have won the last five titles between them.

Three seasons ago Ireland drew at home with Wales on opening day and finished third, while two seasons ago they lost in Murrayfield and finished second, And if in the same corner as a year ago in Paris, they’ll hardly pull off a similar Houdini-esque act of escapology.

“England should focus the mind,” said Rory Best on Friday, and with that “fear factor” Ireland know how to start campaigns strongly – witness the win over the All Blacks in Chicago in 2016, or the 38-3 thrashing of South Africa a year later.

In a BBC documentary on Best this week, the Irish captain revealed that last year’s win over France was “probably one of the victories that I enjoyed least with Ireland”.

It transpires that he considered stepping down from the captaincy and away from the team a year ago this week due to the furore over his appearance at the Belfast rape trial of Paddy Jackson and Stuart Olding on the squad’s “down day” before the opener in Paris.

Now, on the eve of his 15th and possibly last rendezvous with England, against whom he has a 7-7 record, Best tried to explain why England games focus Irish minds.

“There’s a lot of history. When you think back to Brian O’Driscoll’s documentary and [when] the English came over when nobody else would [in 1972], there’s a lot of that about them. When you get that familiarity about you, you get that intense rivalry,” he said, adding that this had increased with Ireland’s emergence in recent years.

“It’s just special, they bring travelling support. Everyone gets their back up a little bit in the crowd when the English are here because they want to see a big performance. From our point of view we don’t focus on any of that. We focus on the side that we have to bring a big performance.”

Rivals grumble about the Irish style content, but under Joe Schmidt Ireland have become a remorseless machine. Hence players fit in seamlessly, and, as Best noted, it is also based on the solid foundations of good preparation and becoming a team that backs up big performances.

“It’s what you need, and especially with a vicious circle that the better you are the more targets are on your back; then the better you need to be the next time. That’s where we are at the minute. I think it is a really exciting place, but it is a challenge.”

Maintaining this “vicious circle” seems all the more pertinent in the year that is in it, but forget the World Cup for a moment. Ireland are chasing the country’s greatest rugby achievement. Since the introduction of the Five Nations in 1910, back to back Grand Slams have only happened four times, and only twice since the 1920s, by England in 1991 and 1992, and France in 1997 and 1998.

Successive Championships have been achieved eight times since the early 1990s, and five times since the Six Nations came into being in 2000. But even to that end, opening wins are almost imperative.

Only three times in the 25 years since the introduction of points’ difference to determine final standings has a team lost on the opening weekend and gone on to win the title.

England bring a heavyweight pack with plenty of ballast, a mix of brute force and creativity in midfield, and a seriously quick back three.

It will be both bitterly cold and frenzied, and will have the normally excellent Jérôme Garcès who, said Schmidt, will want the game to flow while allowing a contest at the breakdown.

Akin to two years ago, Ireland will need to curtail Billy Vunipola. But more settled, there’s also a degree of efficiency across the set-piece, mauls and breakdown which can ultimately wear England down.

With the Conor Murray-Sexton axis pulling the strings, Ireland also have the smarts to manipulate England’s defence, which has a new midfield combination. With a record dozen home wins on the spin, and England a calling, there’s also the Aviva factor.